Is Kirk rookie of the month?
9yAdam Rubin
MLB Power Rankings: Where all 30 teams stand as playoff picture comes into focus
4dESPN.com
Prospects who have taken the biggest step forward in 2021 for all 30 MLB teams
6dKiley McDaniel
Mets, Phillies minor leaguers protest low pay
9d
MLB Power Rankings: Where all 30 teams stand as the top squads start to clinch
11dESPN.com
MLB Awards Watch: A Cy Young run for the ages and how Ohtani could lose AL MVP
12dBradford Doolittle and David Schoenfield
This is 40: Wainwright outpitches Hill in Cards' W
13d
Lindor settles spat with 3 HRs to down Yankees
14d
10 teams, 3 playoff spots: Breaking down MLB's contenders
14dAlden Gonzalez
Are the '86 Mets the best MLB team of the past half-century? We rank the top 10 contenders
13dDavid Schoenfield
MLB Power Rankings: Where all 30 teams stand as the wild-card races heat up
18dESPN.com
DeGrom's elbow 'perfectly intact'; return unclear
20d
May 1, 2012 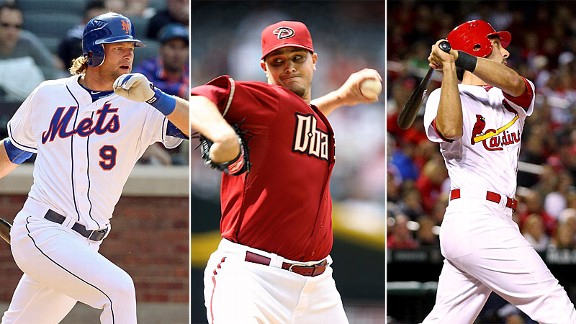 Kirk Nieuwenhuis has a strong case to be made for NL Rookie of the Month over Wade Miley (center) or Matt Carpenter (right).

Only one Met has won the NL's Rookie of the Month award since the award's introduction in 2001. That would be Justin Turner last May.

Could he have company when the April 2012 award is announced Wednesday? It looks very possible.

Center fielder-turned-left fielder Kirk Nieuwenhuis produced a .325 average, two homers and eight RBIs in April, and remained in the leadoff spot Monday even upon Andres Torres' return from the DL.

Despite his game-altering misjudgment against the San Francisco Giants, when the ball dropped behind him and prolonged a game the Mets eventually salvaged, Nieuwenhuis since has continued to have highlight-reel catches. That includes taking an extra-base hit away from Jose Reyes in the ex-Met's first at-bat upon returning to Citi Field as well as Sunday in the fifth inning at Denver on a shot to left-center by Jonathan Herrera that preserved a scoreless outing for Johan Santana.

On the pitching side, Arizona Diamondbacks left-hander Wade Miley looks like he would have the best case. In five appearances (two starts), Miley went 3-0 with a 1.29 ERA in 21 innings. He allowed only 10 hits while striking out 15 and walking seven. Only one other NL rookie pitcher exceeded one win. That would be Atlanta's Randall Delgado, who had a 6.30 ERA along with his 2-2 record. (Check the full NL rookie pitcher list here.)

Of course, beginning next month, Bryce Harper will be on the ballot.