5 tidbits about Jordany Valdespin
9yAdam Rubin
Carrasco has bone fragment removed from elbow
2d
A fans guide to abiding the LOL Mets
16dDevin Gordon
Jeff Passan answers 20 burning questions about the MLB playoffs
16dJeff Passan
What's next for the New York Mets after Luis Rojas' departure
18dBradford Doolittle and David Schoenfield
Mets move on from Rojas after 3rd-place finish
18d
Mets likely to make Rojas decision before others
23d
MLB Power Rankings: Where all 30 teams stand in the final week
22dESPN.com
Mets give Syndergaard start, shut deGrom down
24d
Your squad isn't going to the MLB playoffs? The No. 1 offseason question for each eliminated team
18dBradford Doolittle
Passan's early MLB free-agency tiers: Which stars are going to get paid this winter?
23dJeff Passan
MLB Power Rankings: Where all 30 teams stand as playoff picture comes into focus
29dESPN.com
Prospects who have taken the biggest step forward in 2021 for all 30 MLB teams
31dKiley McDaniel
May 8, 2012

Jordany Valdespin, fresh off homering against Phillies closer Jonathan Papelbon in the ninth inning Monday night for his first major league hit, is due to start at shortstop on Tuesday. Here are five nuggets about the rookie, whose three-run shot lifted the Mets to a 5-2 win in Philly in the series opener:

1. Valdespin originally signed with the Mets out of the Dominican Republic on June 12, 2007, as a 19-year-old. Omar Minaya often touted Valdespin as a prospect to watch as he played throughout the lower levels of the minor league system. 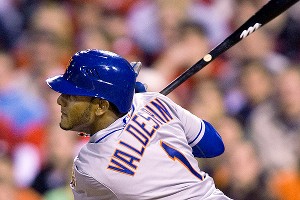 2. Until this season, Valdespin has been a middle infielder throughout his career. He has played in 210 career minor league games at second base and 146 games at shortstop. Beginning late in this year's big league camp though, when Andres Torres and Scott Hairston both were iffy for Opening Day, Valdespin began playing center field. He coincidentally had dabbled at the position working out in winter ball last offseason with Licey, but had not appeared in a game there.

With Triple-A Buffalo this season, Valdespin had appeared in only three games at second base and one game at shortstop. He logged 14 games in center field.

3. Scouts still have serious reservations about Valdespin being more than a utility player. Even Terry Collins noted Valdespin had discipline problems in the minors. While he has stolen 86 bases in six seasons in the minors, he also has been caught 44 times, for a success rate of 66 percent. His career high for walks in a season was a modest 25 last year, between Double-A Binghamton and Triple-A Buffalo, in a combined 554 plate appearances.

"Still too much head movement," said a scout who has tracked Valdespin after observing the rookie in person during his first cameo with the Mets this season. "Will be a problem for him with hard stuff in and recognition of off-speed stuff, especially straight changeups."

5. Collins said pregame Monday that Ronny Cedeno should be the regular shortstop by the weekend, once he returns from the DL, until Ruben Tejada recovers from a right quadriceps strain. After Valdespin's heroics, the manager said late Monday regarding the rookie: "He is an extremely talented young player. ... If he plays the way he's been playing since he's been here, the way he's handled himself, he has a chance to be here a while."