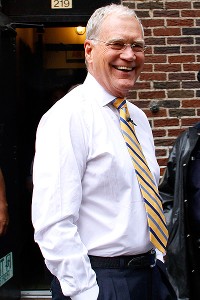 Johan Santana bailed on reading David Letterman's Top 10 list on the "Late Show," so Letterman did the honors himself, asking viewers to picture Santana delivering the list -- "Top 10 pitches Johan Santana used during his no-hitter."

"Originally he was going to do this list," Letterman told viewers. "But he had to catch a plane because they're on the road. So I said, 'Well, hell, I'll do the list.'

"So you're probably saying to yourself, 'Well, yeah, I could see where that would be funnier if it was actually the guy.' I'm just going to read them ..."

Letterman then went through a few blah entries during the countdown, including "No. 9, the Lucille Ball" and "No. 8, the Pulled-Pork Slider."

"And the No. 1 pitch Johan Santana used during his no-hitter: The Thank-God-There's-No-Instant-Replay ball."