Source: Mejia bullpen role imminent
9yAdam Rubin
A fans guide to abiding the LOL Mets
12dDevin Gordon
Jeff Passan answers 20 burning questions about the MLB playoffs
12dJeff Passan
What's next for the New York Mets after Luis Rojas' departure
13dBradford Doolittle and David Schoenfield
Mets move on from Rojas after 3rd-place finish
13d
Mets likely to make Rojas decision before others
18d
MLB Power Rankings: Where all 30 teams stand in the final week
18dESPN.com
Mets give Syndergaard start, shut deGrom down
19d
Your squad isn't going to the MLB playoffs? The No. 1 offseason question for each eliminated team
14dBradford Doolittle
Passan's early MLB free-agency tiers: Which stars are going to get paid this winter?
19dJeff Passan
MLB Power Rankings: Where all 30 teams stand as playoff picture comes into focus
25dESPN.com
Prospects who have taken the biggest step forward in 2021 for all 30 MLB teams
27dKiley McDaniel
Jun 9, 2012 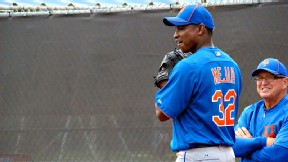 Jenrry Mejia's role is expected to imminently shift to the bullpen in the minors, in preparation for a major league call-up.Jenrry Mejia, who opposes Jamie Moyer on Saturday night at Buffalo, is likely making his final minor league start before shifting to a bullpen role with the Triple-A club, an organization source told ESPNNewYork.com.

Mejia, 22, has been capably pitching in a starting capacity as he works back from Tommy John surgery, which was performed on May 16, 2011. The role allowed Mejia to work on his secondary pitches with guaranteed regular work. But Mejia is likely to contribute to the major league club in relief within a couple of weeks, and now has been deemed ready to get exposure to bullpen duty with the Bisons to ready for that major league role, the source said.

Mejia has made six minor league starts entering tonight's International League game -- two apiece at Class A St. Lucie, Double-A Binghamton and Buffalo. Overall, he is 1-0 with a 2.97 ERA. Mejia allowed 22 hits and seven walks while striking out 21 in 30 1/3 innings.