Tee time for Bay; Frankie ready to toss
9yAdam Rubin
A fans guide to abiding the LOL Mets
12dDevin Gordon
Jeff Passan answers 20 burning questions about the MLB playoffs
12dJeff Passan
What's next for the New York Mets after Luis Rojas' departure
13dBradford Doolittle and David Schoenfield
Mets move on from Rojas after 3rd-place finish
13d
Mets likely to make Rojas decision before others
18d
MLB Power Rankings: Where all 30 teams stand in the final week
18dESPN.com
Mets give Syndergaard start, shut deGrom down
19d
Your squad isn't going to the MLB playoffs? The No. 1 offseason question for each eliminated team
14dBradford Doolittle
Passan's early MLB free-agency tiers: Which stars are going to get paid this winter?
19dJeff Passan
MLB Power Rankings: Where all 30 teams stand as playoff picture comes into focus
25dESPN.com
Prospects who have taken the biggest step forward in 2021 for all 30 MLB teams
27dKiley McDaniel
Jul 1, 2012 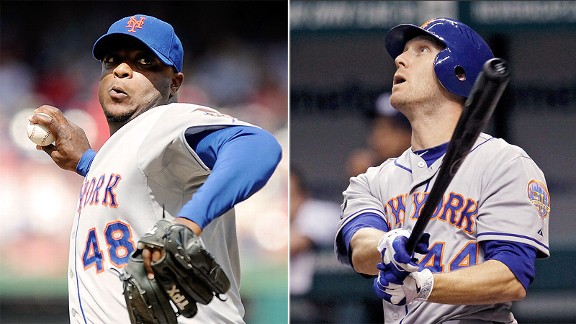 Frank Francisco will begin to toss a baseball, while Jason Bay runs and hits off a tee for Mets medical staff Monday.

LOS ANGELES -- Jason Bay, who suffered a concussion on June 15, is due to hit off a tee as well as run for Mets medical staffers on Monday in New York. After that activity, it will be determined whether Bay should head to Port St. Lucie, Fla., to continue ramping up activity at the team's complex, Terry Collins said.

Francisco landed on the disabled list with a left oblique strain after appearing in the Subway Series opener at Citi Field. He is eligible to be activated next Sunday. Since that is the first-half finale, though, clearly the July 13 resumption of play after the All-Star break seems a more likely target date for Francisco's return from the DL.