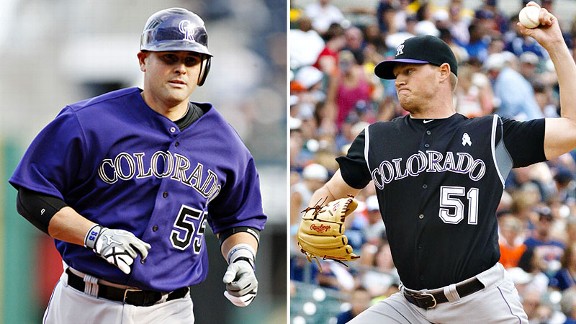 A source tells ESPNNewYork.com the Mets are talking with the Rockies about catcher Ramon Hernandez (left), and are trying to get left-hander Matt Reynolds (right) included in a deal.

Righty-hitting Rockies catcher Ramon Hernandez, currently on a rehab assignment from a hand injury, is a potential trade target for the Mets, according to a major league source. The discussions are serious enough that one source said, while offering no guarantee: "I think Hernandez will be a Met."

The source said Sandy Alderson was trying to expand the deal to include lefty reliever Matt Reynolds.

"I think he's looking to add that to the package," the source said.

Hernandez is nearing activation from the disabled list, but Wilin Rosario is now Colorado's No. 1 catcher.

The Rockies always have liked Justin Turner, and attempted to acquire him last offseason from the Mets before obtaining Marco Scutaro. The Mets potentially could get such a deal done as well without departing with core minor league prospects -- instead the likes of perhaps Double-A shortstop Wilfredo Tovar or a Class A right-hander such as Domingo Tapia. Other potential minor leaguers who could be involved: Matt den Dekker , Josh Edgin, Jacob deGrom and Chase Huchingson.