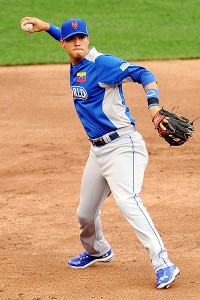 Wilmer Flores started at third base and went 0-for-2 for the World team.

Wilmer Flores started at third base for the World team and went 0-for-2 while right-hander Zack Wheeler retired both batters he faced in the Futures Game on Sunday in Kansas City.

After entering with two outs in the eighth, Wheeler coaxed a flyout to center field from Indians prospect Jesus Aguilar. He then retired the Twins' Oswaldo Arcia on a groundout to third base to open the following frame before departing. Wheeler threw only seven pitches.

Both players were competing in their second Futures Game.