ATLANTA -- Jason Bay's rehab tour is moving to Triple-A Buffalo today as the designated hitter, and Terry Collins said it is "conceivably" realistic for Bay to be activated from the DL on Tuesday in Washington.

Collins plans to speak with Bay by phone on Sunday to seek an honest answer about his major league readiness. Bay went 0-for-6 with two walks in a pair of games with Class A St. Lucie. 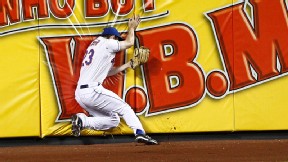 Mike Baxter is due to begin a rehab assignment Sunday as he returns from the shoulder injury suffered in Johan Santana's no-hitter-saving catch.

Meanwhile, Mike Baxter is due to begin a rehab assignment Sunday with St. Lucie, his first game action since displacing his right collarbone on that no-hitter-saving catch June 1.

Once Bay returns, Collins speculated against left-handed pitching that his outfield alignment may often be Bay in left field, Andres Torres in center field and Scott Hairston in right field.

That would be at the expense of playing time for slumping Lucas Duda, who is sitting this weekend with a left hamstring issue anyway.

"In Lucas' case, it's all about the bat," Collins said. "If he's driving in runs like he was early in the year, you can get by with some things [defensively], because the one thing you don't want to do is take his bat out of the lineup. When he's not hitting, both sides of the game have to be analyzed a little bit. And he knows that."