Gee hopeful for 2012 return
9yAdam Rubin
Carrasco has bone fragment removed from elbow
6d
A fans guide to abiding the LOL Mets
20dDevin Gordon
Jeff Passan answers 20 burning questions about the MLB playoffs
20dJeff Passan
What's next for the New York Mets after Luis Rojas' departure
22dBradford Doolittle and David Schoenfield
Mets move on from Rojas after 3rd-place finish
22d
Mets likely to make Rojas decision before others
26d
MLB Power Rankings: Where all 30 teams stand in the final week
26dESPN.com
Mets give Syndergaard start, shut deGrom down
28d
Your squad isn't going to the MLB playoffs? The No. 1 offseason question for each eliminated team
22dBradford Doolittle
Passan's early MLB free-agency tiers: Which stars are going to get paid this winter?
27dJeff Passan
MLB Power Rankings: Where all 30 teams stand as playoff picture comes into focus
33dESPN.com
Prospects who have taken the biggest step forward in 2021 for all 30 MLB teams
35dKiley McDaniel
Jul 17, 2012

WASHINGTON -- Dillon Gee lost near-complete feeling in his right arm last Sunday and doctors could not find a pulse in the limb. 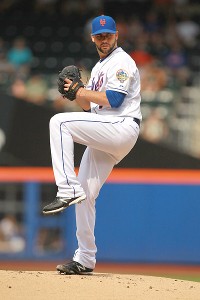 Dillon Gee said doctors could not detect a pulse in his right arm last Sunday.

Five days later, Gee underwent surgery at Barnes-Jewish Hospital in St. Louis to patch a damaged artery in his pitching shoulder that had been 96 percent blocked. Dr. Robert Thompson used a vein from Gee’s groin to enlarge the artery.

Gee was discharged from the hospital Monday. He may resume throwing in six weeks and hopes to return before the end of the season.

“Right now I feel good,” Gee said. “My arm feels good. All the symptoms are gone. So that’s a positive. It’s been a long week for me. This thing kind of came out of the blue and hit me really fast. To be honest with you, it was very scary at first, kind of tough to go through."

Medical personnel told Gee his life was never endangered. Had the clot in his shoulder dislodged, it would have traveled no further than his pitching hand and got stuck.

However, had he not treated the issue when he did, Gee could have suffered permanent muscle-tissue damage that may have jeopardized his career.

Gee said he had “very sporadically” experienced numbness in the tip of his right middle finger since 2010. Doctors informed him the artery damage likely was the result of his repetitive pitching motion. He has follow-up visits scheduled in three weeks and in six weeks and hopes to be cleared during the latter exam to resume throwing.