Beato apologizes to Thole; TC calls meeting
9yAdam Rubin
Carrasco has bone fragment removed from elbow
7d
A fans guide to abiding the LOL Mets
22dDevin Gordon
Jeff Passan answers 20 burning questions about the MLB playoffs
22dJeff Passan
What's next for the New York Mets after Luis Rojas' departure
23dBradford Doolittle and David Schoenfield
Mets move on from Rojas after 3rd-place finish
23d
Mets likely to make Rojas decision before others
28d
MLB Power Rankings: Where all 30 teams stand in the final week
28dESPN.com
Mets give Syndergaard start, shut deGrom down
29d
Your squad isn't going to the MLB playoffs? The No. 1 offseason question for each eliminated team
24dBradford Doolittle
Passan's early MLB free-agency tiers: Which stars are going to get paid this winter?
29dJeff Passan
MLB Power Rankings: Where all 30 teams stand as playoff picture comes into focus
35dESPN.com
Prospects who have taken the biggest step forward in 2021 for all 30 MLB teams
37dKiley McDaniel
Jul 18, 2012 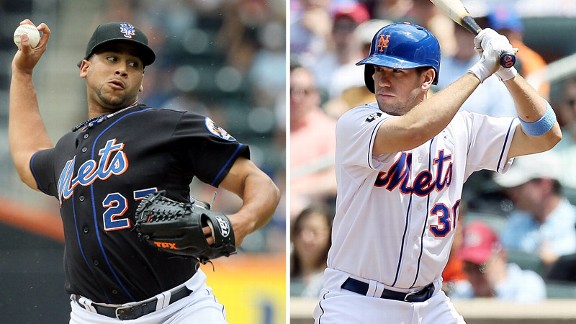 Pedro Beato apologized to Josh Thole on Wednesday, a day after wondering whether the catcher could have blocked a game-ending wild pitch.

WASHINGTON -- Pedro Beato apologized to Josh Thole even before they arrived at the ballpark Wednesday, hoping to avoid any confusion over his intention with a postgame comment Tuesday.

Beato, who threw a game-ending wild pitch, noted he yanked the curveball and bounced it wide of the plate. Beato also noted Thole was unable to block it.

Concerned that left the impression he was throwing Thole under the bus, Beato reached out to Thole.

Thole said the whole episode really was no big deal.

Beato had said Tuesday night, after the 5-4, 10-inning loss to the Nats: "I tried to get it down … on the floor, so he can swing over it. And I yanked a little too far. Unfortunately, Thole wasn't able to get to it and it got away from him."

Terry Collins was concerned enough about the comment, and about the psyche of his team during this five-game losing streak, that he did plan to address the players pregame. Collins said he has not held a team meeting in about a month, and likes to hold them only infrequently because otherwise the players tune them out.

"We're going to talk about, 'Hey, look, this is a tough time right now. The one thing we've done in the past, that we talked about in spring training, we're going to do it together. We've got your backs. Let's go,'" Collins said. "We've got to grind this thing out, because that's how we got to this point. This is an important part where this thing can go flat. We're not going to let it."

Collins continued, referring to the Beato quote without explicitly naming it: "I didn't like what I saw happen after the game last night. I read that one of our players said something that he shouldn't have said. I didn't like that quote. So we're going to address it today. I talked to him about it already. He didn't mean it to come out the way it came out. So we're going to make sure it's addressed in a little bit, because we can't let that happen. We can't let that drive a wedge in this thing. We've worked too hard to get it going smooth."

Collins, incidentally, did not think Thole had much of a chance to block Beato's wild pitch.