Bay, not 'Spin starts in left field
9yAdam Rubin
Carrasco has bone fragment removed from elbow
6d
A fans guide to abiding the LOL Mets
20dDevin Gordon
Jeff Passan answers 20 burning questions about the MLB playoffs
20dJeff Passan
What's next for the New York Mets after Luis Rojas' departure
22dBradford Doolittle and David Schoenfield
Mets move on from Rojas after 3rd-place finish
22d
Mets likely to make Rojas decision before others
27d
MLB Power Rankings: Where all 30 teams stand in the final week
26dESPN.com
Mets give Syndergaard start, shut deGrom down
28d
Your squad isn't going to the MLB playoffs? The No. 1 offseason question for each eliminated team
22dBradford Doolittle
Passan's early MLB free-agency tiers: Which stars are going to get paid this winter?
27dJeff Passan
MLB Power Rankings: Where all 30 teams stand as playoff picture comes into focus
33dESPN.com
Prospects who have taken the biggest step forward in 2021 for all 30 MLB teams
35dKiley McDaniel
Jul 18, 2012

WASHINGTON -- Terry Collins said Jason Bay does not have exclusivity in terms of being the left fielder, but the manager reasoned that it made sense to start him because of the starting pitcher.

No, he did not mean Nationals right-hander Jordan Zimmermann. Collins meant Mets starter Chris Young, who is a fly ball pitcher. 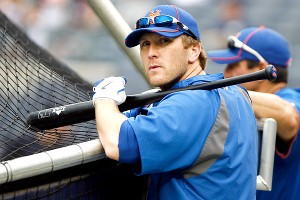 Jason Bay starts over Jordany Valdespin in left field on Wednesday.Collins said he needs to maximize his outfield defense for Young.

"He's such a fly-ball guy," Collins said. "He's had a couple of outings where some balls, we thought might have had a chance to have been caught."

Right field was not an option for Jordany Valdespin, since Collins wanted to get Lucas Duda back in the starting lineup for the first time since Friday, with Duda's left hamstring appearing to have calmed.

"In this ballpark, left-handed bats, guys with some power, can be dangerous," Collins said. "So I wanted to get him back in there."

Asked if Bay was an everyday player, Collins said: "I'm going to mix and match a little bit. I talked to Jason today about it. I told him, 'Look, you're back in there. And you're going to be back in there tomorrow [against left-hander Gio Gonzalez]. We've got to start getting you to seeing this kind of pitching.' As we've talked about in the past, when you're seeing Triple-A pitching, you forget how good the next level is. So we've got to get him back in there and see if we can get him going."