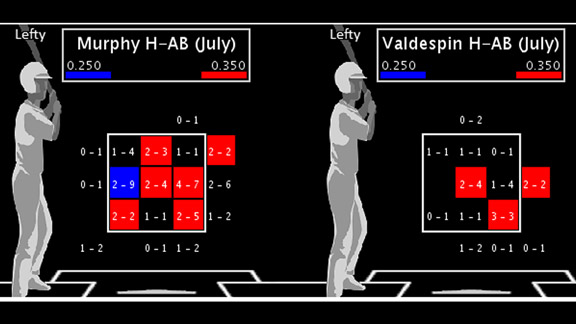 The two hottest Mets right now are Daniel Murphy and Jordany Valdespin.Stat of the Series: So close, but yet so far

The three-game sweep made the Mets 1-8 since the All-Star Break.

In seven of the eight losses, the Mets have either lost by walk-off, or had the tying or go-ahead run come to the plate in the ninth inning or later of the game.

Jordany Valdespin tied the Mets record for pinch-hit homers with his fourth of the season, matching the mark previously set by Danny Heep in 1983 and shared with Mark Carreon in 1989.

The home run came on a pitch on the outside corner of the plate. Valdespin is 6-for-12 this month on pitches that were on the outer-third of the plate or further away. He was 7-for-33 in at-bats ending with such pitches entering the month.

Daniel Murphy had his second four-hit game of the series in Sunday's loss. He joined Mookie Wilson as the only players to have a pair of four-hit games in the same series against the Dodgers. Wilson did so in 1985 in a four-game series.

That's actually particularly amazing considering that Murphy is swinging-and-missing nearly twice as often in July (14 percent of the time) than June (7.5 percent)

Santana became the third starting pitcher in Mets history to allow at least six runs in three innings or fewer against the Dodgers at home. The other two were Roger Craig in 1963 and Astacio during the streak noted above in 2002.

In fact, the Dodgers entered the day with three of the bottom seven names on that list: Andre Ethier (third .175), Uribe, and Jerry Hairston Jr. (sixth, .211)

Uribe had the best day of that trio, with a home run and four RBI. He was 1-for-36 in the 17 games prior to Saturday.

Step Right Up and Beat the Mets

The only other Dodgers reliever to beat the Mets in his major-league debut brings back bitter Mets memories. That was Tim Belcher in 1987 (in a 16-inning game). Belcher would go on to beat the Mets twice in the 1988 NLCS.