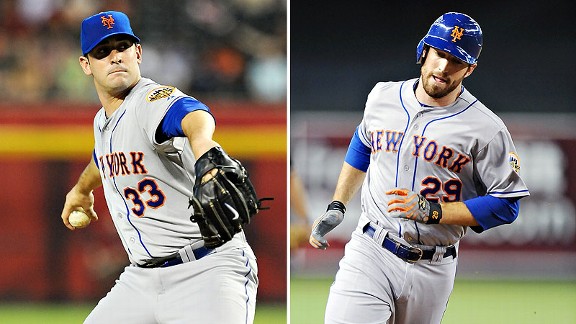 R.A. Dickey had among the most memorable first halves in Mets history.Let's take a closer look at the two most notable performers from the series against the Diamondbacks:

The most widely quoted stat around the majors this week, thanks to the Elias Sports Bureau, was that Matt Harvey became the first pitcher in modern major league history (since 1900) to strike out at least 10 hitters and get two hits in his debut on Thursday.

But what else was of note from Harvey’s brilliant work?

All-Star stat of the debut: Harvey is the 13th Mets starter to win his major league debut. He was the first to do so by beating a pitcher (Wade Miley) who had been selected to the All-Star Game that season.

Obscure stat of the debut: He was the third pitcher to throw at least two wild pitches in his debut, joining Ray Daviault (1962) and Aaron Heilman (2003).

Bobby Parnell recorded a bizarre save, with three whiffs and two walks in one inning. He’s the third Mets pitcher to have a three-whiff/two-walk one-inning save, joining Armando Benitez in 1999 and Billy Wagner in 2007.

The 16 strikeouts by Mets pitchers were three more than they’ve ever had in any nine-inning game against the Diamondbacks. They were the most the Mets have had in a nine-inning road game since they had 16 against the Marlins in 2006.

It tied for the second-most strikeouts they’ve ever had in a nine-inning road game. (The record is 19, all by David Cone in 1991 against the Phillies.)

Ike Davis hit three home runs in the Mets' Saturday night loss. It was the ninth three-homer game in Mets history, all of which have come on the road.

In the last seven seasons, the Mets are 1-2 in games in which they’ve had a player hit three home runs in a game. All other teams are a combined 51-4.

Davis became the second first baseman in Mets history to hit three home runs in a game. The other was Jim Hickman against the Cardinals in 1965. (Thanks to Yankeemetrics writer Katie Sharp, who alerted me to this.)

He’s the third Met to hit three home runs in a game from the left side of the plate, joining Claudell Washington (1980) and Darryl Strawberry (1985).

He finished tied for the second-most total bases in a game in Mets history.