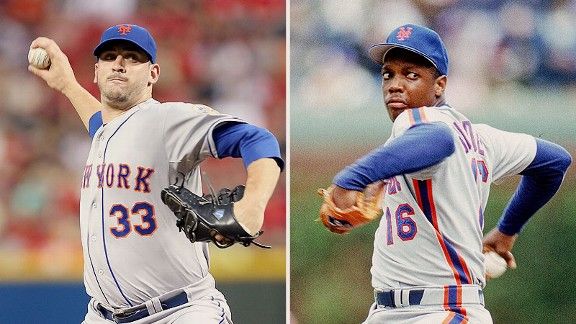 Matt Harvey wasn't quite Dwight Gooden in his debut season, but his numbers were great nonetheless.It was a heck of a way to finish a 10-start run in Matt Harvey’s initial big-league stint.

He’s also just the second Mets starter to allow one hit or fewer in seven innings or more, within his first 10 major-league appearances. Octavio Dotel also did so in 1999.

But let’s look at this from the perspective of the collective body of work.

Narrowing the field to look only at the 20 Mets pitchers in their debut season, Harvey ...

Harvey joined Sid Fernandez (five times) and Nolan Ryan (three times) as the only Mets pitchers to post an opponents’ batting average of .200 or lower in a season with at least 10 starts.

-- Had the second-best best strikeouts-per-nine (10.6), trailing only Gooden’s 11.4 in 1984. In fact, Harvey’s strikeouts per nine innings is the second best in Mets history for a pitcher who made at least 10 starts.

What Harvey did best

Harvey at his best was able to get swings-and-misses at a very high rate. He got at least 10 of them in all but one start, closing the season with 14 in his terrific start against the Phillies.

Harvey got hitters to miss on 23 percent of their swings against his fastball, the 11th-best among the more than 130 NL pitchers who threw at least 500 fastballs. The 10 pitchers who ranked in front of Harvey are all relievers.

How much did Harvey frustrate hitters? Three pretty good lefties -- Ryan Howard, Carlos Gonzalez, and Bryce Harper -- were a combined 0-for-11 with seven strikeouts against him this season.

The only starting pitcher with a lower two-strike batting average this season than Harvey’s .098 is Kris Medlen of the Braves (.092).

Harvey showed both greatness and inconsistency with his breaking pitches, which faltered a bit in his last two starts of the season.

Harvey may also want to work on how to attack right-handed hitters. Though he held righties to a .190 batting average, his strikeout-to-walk rate was 19-to-11.

Harvey’s fastball, which generated 35 percent misses on swings by lefty hitters, netted only a 10 percent miss rate against righties.