Wright low-key after matching Kranepool
9yAdam Rubin
Carrasco has bone fragment removed from elbow
2d
A fans guide to abiding the LOL Mets
16dDevin Gordon
Jeff Passan answers 20 burning questions about the MLB playoffs
16dJeff Passan
What's next for the New York Mets after Luis Rojas' departure
18dBradford Doolittle and David Schoenfield
Mets move on from Rojas after 3rd-place finish
18d
Mets likely to make Rojas decision before others
22d
MLB Power Rankings: Where all 30 teams stand in the final week
22dESPN.com
Mets give Syndergaard start, shut deGrom down
24d
Your squad isn't going to the MLB playoffs? The No. 1 offseason question for each eliminated team
18dBradford Doolittle
Passan's early MLB free-agency tiers: Which stars are going to get paid this winter?
23dJeff Passan
MLB Power Rankings: Where all 30 teams stand as playoff picture comes into focus
29dESPN.com
Prospects who have taken the biggest step forward in 2021 for all 30 MLB teams
31dKiley McDaniel
Sep 25, 2012 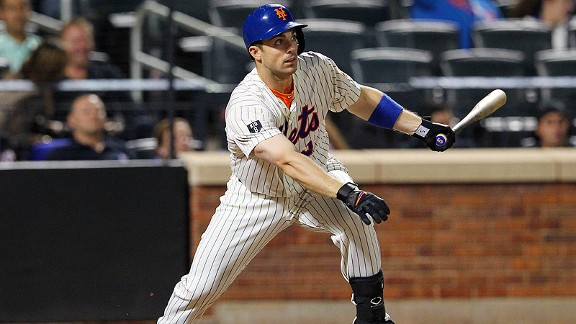 The top-10 hitters in Mets history:

"I don't think you can sit back and really enjoy this until you're done playing -- or, maybe, enjoy it a little bit in the offseason," Wright said after the 10-6 loss to the Pittsburgh Pirates. "I'm not programmed, and it's a little odd and uncomfortable talking about something individual like this, when we've had our struggles in the second half and haven't done what I think all of us feel like we were capable of doing. But I'll enjoy it at some point -- probably not tonight. I have to get ready for tomorrow. But at some point I'm sure I'll enjoy it because it's a nice accomplishment and I'm very proud. ...

"Obviously you'd like to do these types of things in wins. But I'm proud of the fact I was able to tie it, and hopefully I'll break it tomorrow. It's bittersweet, especially kind of playing behind that eight ball early in the game."

"It would be nice to finish strong," Wright said. "I think everybody in here individually wants to finish strong. And we, as a team, want to finish strong. I've used the example of the Orioles numerous times. Hopefully we can end on a positive note and that can springboard us into next year.

"Personally, it's the law of averages. It's extremely difficult to hit .300 and it's damn near impossible to hit .350. So, at some point, you know that some of those line drives aren't going to find some holes and you're going to go into some little slumps. I did that, and have felt like I've had much better at-bats here as of late. But it's a results-oriented game, and obviously you'd like to see the results."

As for the Kranepool record, Wright concluded: "Growing up, you never think that you'll make it to the big leagues much less have this many hits. So I'm proud of that."