Mets farmhand Danny Muno is due to join the Mets' Arizona Fall League contingent today. Muno, an infielder, had been on the original list of participants, but was pulled from the initial group because of what a team official labeled "personal reasons." 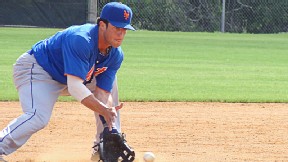 Danny Muno is due to join the Mets' Arizona Fall League contingent today.

He will be on the "taxi squad" for now, permitting him to play twice a week.

Muno, 23, hit .280 with six homers, 39 RBIs and 19 steals in 289 at-bats with Class A St. Lucie this season. He served a 50-game suspension during the season after MLB announced he tested positive for a metabolite of Drostanolone, a performance-enhancing drug.

Surprise, which includes Mets prospects, is 6-4 so far during the AFL season.