R.A. Dickey returned to New York to accept his NL Cy Young Award on Saturday night at the Hilton in midtown Manhattan. Here's what he had to say ...

"I want to thank everybody from Fred and Jeff Wilpon, to Jay Horwitz, to Sandy Alderson. By the way, Jay Horwitz, one of these days they're going to make an award after him. I know it. If you don't know Jay Horwitz, he's the P.R. guy for the Mets. A fantastic guy. But the only thing is, it's not going to be a plaque. It's going to be a bobblehead, with mustard on the tie. But he's great.

"I have so many thank-yous to my Met family. And that's what it really felt like while I was here. I was embraced by the fans and the staff. I don't think I could have ever wished to play for a better manager than Terry Collins. Terry, thank you very much. 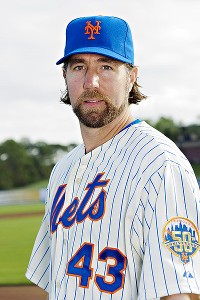 "I have to also thank my agent [Bo McKinnis]. But he's not really my agent. He's much more than that for me. I've known him for a while. We both live in Nashville. And he's the guy who when I wanted to go play in Korea, just to try to make a little bit of money before I hung it up, convinced me that, 'You know, you might have a little bit left. You might not want to go to Korea.' And that was in 2008. So publicly he always rides me about it. Publicly, let me say thank you, Bo, for that. I appreciate that.

"I also need to thank, obviously, my wife [Anne]. She's here. I think Cy Young's wife, her name was Robba. For every Cy Young Award winner who has a mate, is married, there needs to be a Robba Young Award to go alongside of it, because I have drug her from every little city in the country, to Venezuela, to Puerto Rico, to the Dominican Republic, and everywhere in between. All the while, she never wavered. She didn't want me to have any regrets, even when I thought about giving it up to try to support our family. We were making $1,100 a month -- just the months we were playing -- and we were trying to get by. So thank you, Anne, for that. I appreciate it, and I love you.

"And a special thanks to who I refer to as the Jedi council of knuckleballers. They are Charlie Hough, Phil Niekro and Tim Wakefield. When I met Charlie Hough in 2005, I was on my way out. I had run my course as a conventional pitcher, was throwing 85 mph, and didn't have the control of Greg Maddux. I was serving up some balls that still haven't landed. And so I knew it was time to do something else.

"And I had people in my life who loved me well enough to tell me the truth. That was Buck Showalter and Orel Hershiser and Mark Connor. And they said, 'What you've got now isn't going to cut it. And if you want to try to be a knuckleballer, then we'll give you that opportunity.' And so I took it. Seventy-five thousand knuckleballs off a cinder-block wall later, here I am. I would not be here if it weren't for Charlie, Phil and Tim. And this is an award not only to be celebrated with them, but with the city of New York and the New York Mets fan base."