'Spin says relative made controversial tweet
9yAdam Rubin
A fans guide to abiding the LOL Mets
12dDevin Gordon
Jeff Passan answers 20 burning questions about the MLB playoffs
12dJeff Passan
What's next for the New York Mets after Luis Rojas' departure
13dBradford Doolittle and David Schoenfield
Mets move on from Rojas after 3rd-place finish
14d
Mets likely to make Rojas decision before others
18d
MLB Power Rankings: Where all 30 teams stand in the final week
18dESPN.com
Mets give Syndergaard start, shut deGrom down
20d
Your squad isn't going to the MLB playoffs? The No. 1 offseason question for each eliminated team
14dBradford Doolittle
Passan's early MLB free-agency tiers: Which stars are going to get paid this winter?
19dJeff Passan
MLB Power Rankings: Where all 30 teams stand as playoff picture comes into focus
25dESPN.com
Prospects who have taken the biggest step forward in 2021 for all 30 MLB teams
27dKiley McDaniel
Feb 16, 2013

PORT ST. LUCIE, Fla. -- Jordany Valdespin arrived at Mets camp Saturday and suggested he was not at fault for tweeting a photo of himself in a Marlins cap in December. (View here.)

The image irked some Mets fans. 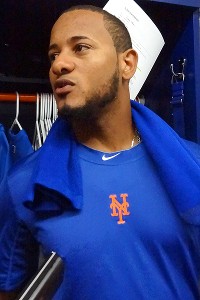 Valdespin said his cousin tweeted the photo without his knowledge or consent.

“Things happen,” Valdespin said. “My cousin put that picture over here. I don’t have any information about that. When I see that picture, everything happened, and I said, ‘What the f---?’ But I had a big problem with my family about that. So that’s not my fault.”

Because Terry Collins is not comfortable with Valdespin backing up Ruben Tejada at shortstop and because he is behind lefty hitters Lucas Duda, Mike Baxter and Kirk Nieuwenhuis in the outfield pecking order among lefty hitters, Valdespin has an uphill battle to make the Opening Day roster and most likely is ticketed for Triple-A Las Vegas to open the season.

Valdespin did set a franchise single-season record with five pinch-hit homers in 2012, but he noted: “That’s not my game. My game is to stay on the bases, steal the bases, help the team how I can do it. That’s my plan for this year.”

He hit .241 with eight homers and 26 RBIs in 191 at-bats in his rookie season in the majors but had only a .286 on-base percentage. Collins was pleased that Valdespin did walk more in the second half of winter ball.

Valdespin believes the ability to play second base and outfield should help him.