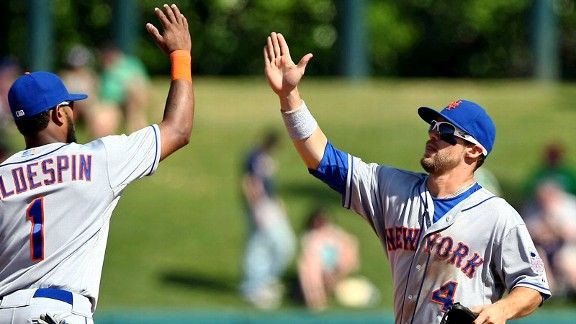 Maybe it won't be so bad for Collin Cowgill, Jordany Valdespin and company.

The 2012 Mets outfield has a chance to be the worst among major league teams since ... last season?

Reports of this Mets outfield rating among the most horrendous ever are a bit exaggerated. For Lucas Duda, Marlon Byrd, Mike Baxter, Kirk Nieuwenhuis, Jordany Valdespin, and Collin Cowgill to sink to those lows will require a level of production that would probably be beyond your worst expectations.

The worst outfield money could buy?

Consider that last season the Houston Astros outfielders combined for a .220 batting average, .297 on-base percentage, and .349 slugging percentage. They posted a combined .645 OPS, the worst by any NL outfield since the 1986 Cardinals .643.

The Astros gave nearly 1,400 at-bats to J.D. Martinez, Jordan Schafer, Brian Bogusevic and Justin Maxwell. None of the four hit over .230 or had an on-base percentage of .311 and Schafer and Bogusevic couldn’t even crack a .600 OPS.

And remember that this team plays half its games in hitter-friendly Minute-Maid Park.

Go back two years and there’s a Mariners outfield that might be even worse than that, one whose combined OPS was a meager .608. Keep in mind that their outfield has produced so little lately that they signed Jason Bay this offseason hoping he’ll be an offensive upgrade.

Last season with Bay and Andres Torres among the most significant contributors, the Mets outfield OPS was a combined .696. The current group would have to be more than 50 points worse than last year just to sink to the Astros level and nearly 100 points to drop to the level of those Mariners.

Could this be the worst Mets outfield in club history?

Maybe. But it’s going to take some effort to be that bad.

In their 51-season history, the worst OPS by a Mets outfield was .638 -- produced by the 1965 combo of Ron Swoboda, Jim Hickman, Johnny Lewis, and Joe Christopher. Their combined batting average/on-base percentage/slugging percentage slashline was .223/.284/.354.

Despite their .638 OPS being a whopping 117 points below the NL average of .755, there was hope for that group’s future. Swoboda would go on to be a key part of the 1969 Mets championship team. Cleon Jones, who played 30 games as a 22-year old and hit .149, would have one of the best offensive seasons in Mets history four years later. Hickman eventually became an All-Star, though not with the Mets.

The one outfield that best rivals the 1965 club’s for mediocrity relative to era is the one from the strike-shortened 1994 season.

That one featured Kevin McReynolds at the tail end of his career, contributing just four home runs in 180 at-bats, Ryan Thompson and his .225 batting average and strikeout-per-game rate taking up space in centerfield, and Joe Orsulak giving it his best effort (to a .299 on-base percentage) in right. The fill-ins were a young (and strikeout-prone) Jeromy Burnitz, and replacement-level poster children Jim Lindeman, and John Cangelosi.

Similarly, the 2001 outfield, which featured Benny Agbayani, Darryl Hamilton, Jay Payton and Timo Perez, all at the worst points in their careers, was dreadful compared to the rest of the National League. Their .703 OPS was worst in the NL, 49 points behind the next-worst (the Expos).

A dozen players had more home runs that season than the Mets outfield had combined (40).

So with all that in mind, how bad is the Mets outfield expected to be?

We ran through Dan Szymborski’s ZiPS projections for Duda, Baxter, Nieuwenhuis, Cowgill, Valdespin and Byrd just to get an idea of what their combined slashlines should be this season.

If that .696 OPS sounds familiar, it should.

It’s the same OPS the Mets outfield had last season.