Mets executive vice president for business Dave Howard is leaving the ballclub. He will become president of MSG Sports, the company announced. He will begin work April 9.

The Mets indicated that team executives Paul Asencio, Leigh Castergine and David Newman will now join Mike Landeen in reporting to Jeff Wilpon to absorb Howard's role for the near future. Wilpon also will pick up some of Howard's duties.

Here is the full release from MSG Sports:

Hank Ratner, president and chief executive officer of The Madison Square Garden Company, today announced that distinguished sports executive, Dave Howard, has joined the company as president, MSG Sports, effective April 9. In this role, Mr. Howard will be responsible for running the business operations of the New York Knicks, New York Rangers, New York Liberty and Hartford Whale, as well as the management of the company’s Sports Properties unit. 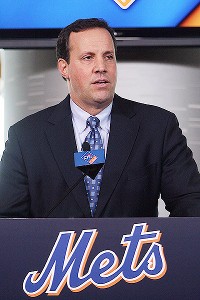 “Dave has been one of New York’s premier sports executives for over two decades, and we are pleased he will be joining our Company to lead our sports business,” said Mr. Ratner. “MSG Sports represents some of the most popular and enduring brands in the world, and we’re confident Dave’s vision and management skills will ensure we continue to earn the passionate loyalty of generations of fans, while developing strategic growth opportunities that help drive our business.”

As president of MSG Sports, Mr. Howard will have a wide range of responsibilities tied to the successful operations of the sports division, including optimizing the core businesses, while creating and driving new revenue streams, and enhancing the value of the MSG Sports brand. In addition to managing the strategic plan, budgets and forecasting for the businesses, he will oversee the marketing and game presentations of the Knicks, Rangers and Liberty, as well as the sale of their season and individual game tickets, suites and Madison Club memberships. He will help direct integrated sales, including establishing strategic sponsorships through the development of new inventory packages that drive increased marketing partnerships. Mr. Howard will manage the Sports Properties division, including the presentation of sporting events such college and high school basketball, boxing and tennis, along with the development of new growth opportunities.

“I am honored to be joining The Madison Square Garden Company, and particularly thrilled to have the privilege of leading MSG Sports,” said Mr. Howard. “There are very few organizations anywhere with the strength of MSG’s sports brands, and I look forward to utilizing my experience to ensure we build on MSG’s position as one of the world’s leading sports organizations. I would also like to thank the Mets’ ownership and organization for what has been an amazing professional experience in Flushing.”

Mr. Howard joins MSG Sports following more than two decades at the New York Mets organization and Major League Baseball. Most recently, he served as executive vice president of business operations for the Mets, where he oversaw all business departments, including ticket sales & services, corporate sales & partnerships, marketing &communications, broadcasting, media relations, venue services, ballpark operations, guest experience and security. In addition, he was responsible for the team’s Florida training facility and the St. Lucie Mets and Brooklyn Cyclones minor league business operations. During his 20 years with the Mets organization, Mr. Howard held a number of significant roles, including as the team’s general counsel, corporate secretary, vice president of business affairs and senior vice president of business and legal affairs. He played a key role in moving the Mets from Shea Stadium to Citi Field, where he was also instrumental in attracting other premier events, including top concerts and college lacrosse, as well as the first-ever major soccer matches. Prior to joining the Mets, Mr. Howard was an associate counsel in the office of the commissioner’s office at Major League Baseball, and an associate at the firm of Davis Polk & Wardwell. He began his career as a law clerk for the Honorable George C. Pratt at the U.S. Court of Appeals for the Second Circuit.