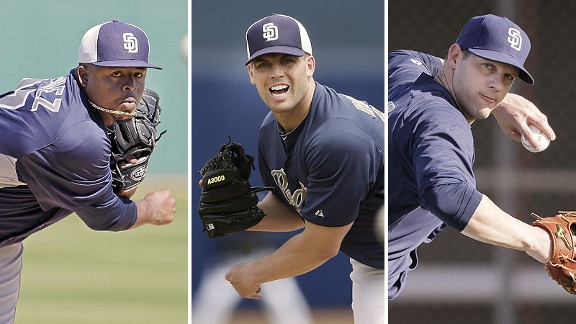 • Chase Headley, who finished fifth in NL MVP balloting last season and won the NL’s Gold Glove at third base, will open the season on the DL with a fractured tip of his left thumb. Logan Forsythe, who was due to fill in, is dealing with plantar fasciitis. So Cody Ransom is the Opening Day starter.

Ransom, 37, signed a minor league contract with San Diego in December. He hit a combined .220 with 11 homers and 42 RBIs in 246 at-bats with the Arizona Diamondbacks and Milwaukee Brewers last season. In 2008, Ransom became the first player in Yankees history to homer in his first two plate appearances with the club. 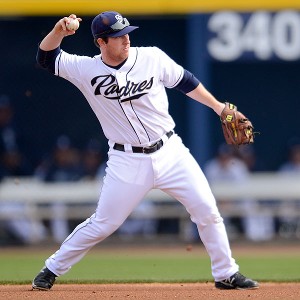 Jedd Gyorko, who had 30 homers in the minors last season, makes his major league debut against the Mets.

• Volquez will make his third straight Opening Day start, which includes 2011 with the Cincinnati Reds. Volquez made three World Baseball Classic appearances for the victorious Dominican Republic, including notching the win against the Netherlands in the semifinals. He walked six in his final Cactus League start, but nonetheless limited the Cincinnati Reds to one run and two hits in five-plus innings.

• Rookie Jedd Gyorko, a second-round pick in 2010 from West Virginia University, will make his major league debut on Opening Day. He hit a combined .311 with 30 homers and 100 RBIs in 2012 between Double-A San Antonio and Triple-A Tucson. The righty-hitting Gyorko will move to third base in place of Ransom, and lefty-hitting Alexi Amarista should start at second base, Wednesday against Harvey. The diminutive Amarista has picked up the nickname "Little Ninja."

• Carlos Quentin, who had two surgeries on his right knee last year, missed more than two weeks of spring training because of soreness but returned to Cactus League action Tuesday. He is poised to start in left field.

• Shortstop Everth Cabrera became the first Padre to lead the NL in steals when he produced 44 in 2012. He was 59 for 63 in steal attempts between Triple-A and the majors. His 24 straight successful steals in the majors set a franchise record to start a season. Cabrera is the reigning Nicaraguan Pro Sports Athlete of the Year.

• Right fielder Chris Denorfia twice has represented Italy in the World Baseball Classic. He hit .381 in five games in this month’s tournament for Mike Piazza’s squad.

• A waiver claim last May from the Chicago White Sox, Stults went 7-1 with a 2.79 ERA in his final 10 starts last season.