Right-hander Noah Syndergaard learned about his potential inclusion in the eventual trade that sent R.A. Dickey to the Toronto Blue Jays via social media.

“I saw a rumor on Twitter, and then I saw all these Mets fans started following me,” Syndergaard recalled Tuesday. “They were welcoming me to the team. I’m like, ‘I don’t think the trade has even gone down yet.’ Two or three days later is when [Jays assistant GM] Tony LaCava finally called me and said I had been traded.” 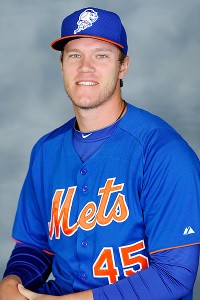 The 20-year-old Syndergaard made his official Mets debut Sunday. He tossed four scoreless innings for Class A St. Lucie, allowing three hits and a walk while striking out five at Jupiter. He sports a fastball that sits at 94-95 mph as well as a solid curveball and changeup.

“My first inning was a little shaky,” Syndergaard said. “I just had a little pregame jitters. Once I settled down, in the second, third and fourth inning, I felt a lot more comfortable on the mound. I’m always nervous before a game until the first pitch is thrown, but being with a new team and a new organization, even being at a higher level, I had a little bit more anxiousness.”

Syndergaard tossed only four innings because he was slowed during spring training by a lat muscle pull and has not yet fully ramped up for a starter’s workload. He should be permitted to go five innings Saturday at Bradenton, in his second regular-season start.

“The second bullpen of the year I felt a little something in my lat. It turned out it was just a little pull,” Syndergaard said. “I’m back at it now, and I think I’m at full strength.”

As for joining a new organization, Syndergaard said: “It’s kind of like starting your first day of school. A lot of new faces. A lot more introductions.

“It’s kind of bittersweet, because I really enjoyed being with the Blue Jays. I made a lot of lifelong friends there. They’ve got a great organization over there. But, at the same time, I’m glad to be a Met. There are a lot of good things going on over here.”

Syndergaard quickly became friends with a pair of high-profile minor leaguers during spring training -- outfielder Brandon Nimmo and right-hander Michael Fulmer, who were the Mets’ top two picks in the 2011 draft. Fulmer and Syndergaard now are sharing an apartment in St. Lucie, while Nimmo has opened the season with low-A Savannah.

Syndergaard did not really know anyone in the organization before arriving, other than Double-A left-hander Mark Cohoon, who had worked out with him a couple of offseasons ago in their native Texas.

“Nimmo, Fulmer and I, we’d always be together,” Syndergaard said about spring training. “I kind of wish Nimmo was with us here in St. Lucie. I kind of miss him. He and I really hit it off. We were really good friends.”

• Jeurys Familia, who picked up his first professional save Monday, will see considerable action as a closer for Las Vegas. That will not be Familia’s exclusive role, though. Because Familia would work in middle relief when he rejoins the Mets, Familia also will get exposure to non-ninth inning relief work with the 51s that involves tossing multiple innings.

• The Mets have pretty much settled on a position for former shortstop Wilmer Flores. Flores exclusively has manned second base for Vegas, except for one game at DH. A team official said Flores still may get a start at third base or first base “here and there.”

• Fulmer, the 44th overall pick in 2011, is making progress from March 12 surgery to repair a torn meniscus in his right knee. He returns to throwing off a mound this week.

• Nimmo, in his first experience with a full-season club, is off to a quick start at Savannah, hitting .417 with four RBIs through six games. Nimmo came on late with Brooklyn last year, in his first professional season. The consensus is Nimmo needed an adjustment period after playing amateur ball in Wyoming.

• Hansel Robles, who was forced from his first start with St. Lucie with an apparent injury after a pickoff throw, is scheduled to start for the Class A club on turn tonight. Robles experienced a sore upper back.

• Left-hander Steven Matz, the Mets’ top pick in 2009 out of Ward Melville High on Long Island, finally may be on track after an injury-plagued beginning to his pro career. Matz, still only 21, took a scoreless effort into the fifth inning with Savannah in his season debut. Both runs charged to him scored after he departed. Matz finished last season with Kingsport having tossed 18 scoreless innings before being shut down with a sore shoulder. His early pro career had been derailed by a long rehab from Tommy John surgery.

• As an indication of the depth in starting pitching in the system, Cohoon is now working full time as a reliever with Binghamton. Cohoon made 23 starts and had a 3.62 ERA last season with the B-Mets.

• Left-hander Darin Gorski, who was removed from the 40-man roster late in spring training, benefited from Aaron Laffey’s promotion to the Mets. Gorski, originally slated to work in a six-man rotation at Binghamton, instead is in Las Vegas’ rotation.