Hairston: Mets wanted 'different direction'
8yAdam Rubin
Carrasco has bone fragment removed from elbow
2d
A fans guide to abiding the LOL Mets
16dDevin Gordon
Jeff Passan answers 20 burning questions about the MLB playoffs
16dJeff Passan
What's next for the New York Mets after Luis Rojas' departure
18dBradford Doolittle and David Schoenfield
Mets move on from Rojas after 3rd-place finish
18d
Mets likely to make Rojas decision before others
22d
MLB Power Rankings: Where all 30 teams stand in the final week
22dESPN.com
Mets give Syndergaard start, shut deGrom down
24d
Your squad isn't going to the MLB playoffs? The No. 1 offseason question for each eliminated team
18dBradford Doolittle
Passan's early MLB free-agency tiers: Which stars are going to get paid this winter?
23dJeff Passan
MLB Power Rankings: Where all 30 teams stand as playoff picture comes into focus
29dESPN.com
Prospects who have taken the biggest step forward in 2021 for all 30 MLB teams
31dKiley McDaniel
May 17, 2013

CHICAGO -- Scott Hairston, who slugged 20 homers in 377 at-bats with the Mets last season, indicated Friday that he did not get a strong sense the front office wanted him to re-sign with the organization.

So Hairston, after stalling, eventually signed a two-year, $5 million deal with the Chicago Cubs on Feb. 10 that included bonuses based on usage. He faces the Mets in a weekend series at Wrigley Field. 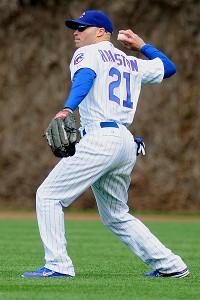 Scott Hairston signed a two-year, $5 million contract with the Cubs in February after stalling for a Mets offer.

Sandy Alderson has suggested regret for not re-signing Hairston. The GM indicated Hairston wanted guaranteed playing time, and Alderson was stalling to see if he could sign free agent Michael Bourn or trade for Justin Upton.

By the time those situations were resolved -- at least Bourn’s situation -- Hairston had signed with the Cubs. Upton was traded to the Atlanta Braves on Jan. 24. Bourn signed with the Cleveland Indians on Feb. 15.

“I was looking more for an opportunity to play every day,” Hairston agreed. “I wanted to find a team where I could do that. New York, at the time, really wasn’t a place for me to play every day. There was some interest there. There were times where I wasn’t sure what they wanted to do, so I waited. But as a player you can only wait so long, so I knew I had to move on and I had to move forward, and that’s just the way it was.”

Hairston nonetheless said he still has respect for Alderson.

Alderson botched the situation in the sense that he joked about not having an outfield -- “What outfield?” he had quipped in November -- and then let an affordable piece like Hairston sign elsewhere while waiting for something better that failed to materialize.

“It’s one of those things where if they were making a move for Justin Upton, logically that would make a lot of sense,” Hairston said. “And obviously the Atlanta Braves came in and swooped Justin away.”

Hairston, who was clear he wanted a two-year deal, did not get any offer from the Mets. Not even one year.

“There were reports that it happened, but the Mets never made me a one-year offer,” he said.

As for his 2012 season, when he hit .263 with 20 homers and 57 RBIs while appearing in 134 games, Hairston said: “The Mets gave me an opportunity. There were certain situations where a few players got hurt. I believe Lucas [Duda] went down to the minor leagues. I happened to get more playing time.

While Hairston did get a two-year contract with the Cubs, he has not received the playing time he desired. He has only 52 plate appearances so far this season and has struggled. He is hitting .125 with three homers and seven RBIs.

“I was hoping to find a place like that this year,” Hairston said, referring to his Mets experience in 2012. “The way things have shaken out here in Chicago, I’m just basically starting against left-handers. I’m just trying to get in a groove somehow.”