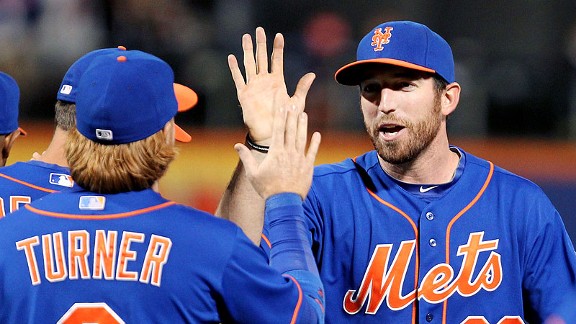 Sandy Alderson had been set to meet with Terry Collins postgame, with Davis expected to be on the agenda, according to an organization source.

Instead, Davis had a night to enjoy -- officially going 2-for-3 with a walk and two RBIs. Davis had been 0-for-his-last 26 with runners in scoring position before the eighth-inning single against Cory Gearrin. Davis entered the game with one RBI in May.

"When he came up with the bases loaded, I said, 'If there's anybody watching, if there's a baseball 'guy,' this kid needs to get a base hit,'" Collins said. "And he got it."

Said Davis: "I wanted to hit the ball in the air to hit a sac fly to make sure I didn't hit into a double play. [Gearrin's fastball] sinks so much it's hard to get under it. ... I just felt like finally I did something productive."

Collins and Alderson had met pregame with Davis in the dugout, in view of an ESPN camera.

"One of the things we told Ike is that we're very, very aware that everybody that knows this guy is trying to help him," Collins said. "One of the things that we tried to get through was, 'You can't listen to everybody. All that adds is confusion. Take a piece here, take a piece there that you think works. But ultimately it's about seeing the baseball and putting a good swing on it.'"

Said Davis: "We had a good conversation before the game started about trying to have fun again. ... Try to smile more and laugh a little bit more, on the field even. Most Mets fans probably hate that, but it's not going to help me perform better by being miserable and not having fun."

Davis said he resolved to take a different tact late Friday, after he struck out in all four plate appearances, the game was suspended and he stayed two hours and hit in a batting cage.

"After the 0-for-4, 'not-finished' game -- I actually went 1-for-5 that game with four K's -- I hit seriously for probably two hours," Davis said. "The next day I felt like I tore everything in my side. Right after that game, I said, 'I can't do this anymore. Something is going to change.'"

"We were talking to him in the dugout. He said, 'Look, I'm human. The booing, I don't like it. But I understand it. I've got to do something about it.' I just think maybe in his mind he came to a place where, 'Look, I've got to go play. And if I don't play good, things happen.'"

Davis sensed his luck might have been changing after he was credited with an infield single in the fourth Sunday night. Second baseman Dan Uggla made a diving stop to seemingly rob Davis, but then bounced a throw that first baseman Freddie Freeman could not handle.