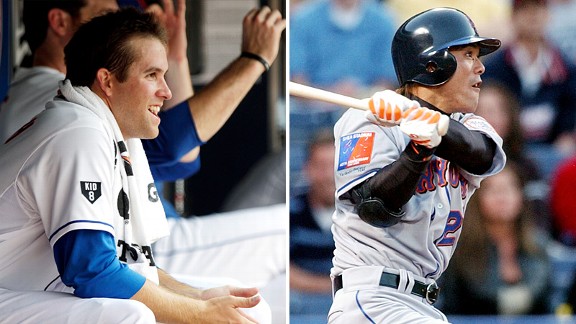 Collin McHugh and Kazuo Matsui had two of the best Mets debuts.With Zack Wheeler making his Mets debut on Tuesday, let's rank the best opening acts in Mets history. We'll go 11-deep for no particular reason other than that is the number that caught our eye.

Matsui made a first impression so good that he could never live up to the subsequent hype -- three hits, two walks and a home run leading off the Opening Day win over the Atlanta Braves. Matsui was expected to be a star, but could never duplicate his debut work.

Did You Know? The last player prior to Matsui to get at least three hits and two walks in his major league debut was John Paciorek, who did so against the Mets in 1963. It would be Paciorek's only game in the majors.

The only Mets pitcher to throw a shutout in his major league debut beat the Reds' ace, Jim Maloney, in a swift two hours, six minutes. Rusteck struck out only four, but dominated. He did not face a runner in scoring position the entire night.

Did You Know? Rusteck made only seven more appearances and two more major league starts. That win would be the only one of his major league career.

Against what was a lineup comprised mostly of minor leaguers, McHugh dominated, allowing two hits and striking out nine in seven scoreless innings.

He’d get a no-decision because the Mets couldn’t score against five Rockies pitchers.

Did you know? McHugh is one of only five pitchers to allow no runs and two hits or fewer, with at least nine strikeouts, in a debut in the modern era, a list that begins with Hall of Famer Juan Marichal (1960).

Most K in Mets Debut

This one wasn’t that long ago, so it should be fresh in the memory bank:

Harvey piled up the pitch count early, limiting him to 5 1/3 scoreless innings, but he was very impressive, both on the mound (with 11 strikeouts) and at the plate (with a pair of base hits in a 3-1 win over the Arizona Diamondbacks).

Did You Know? The Elias Sports Bureau tells us that Harvey is the first pitcher in the modern era (since 1900) to strike out 11 hitters and record two hits in his major league debut.

Gee opened his career with five no-hit innings before surrendering a homer to Mets scourge Willie Harris leading off the sixth. It would be the only run he would allow in seven two-hit frames in a 4-1 win

Did You Know? Gee’s five wins against the Nationals are his most against any major league team.

Evans was not a heralded prospect, but made a quick impression with a three-double debut in a 9-2 win over the Rockies at Coors Field. But Evans wasn’t able to replicate that success in other places and was never able to maintain a permanent role with the team.

Did You Know? Elias tells us that Nick Evans is the second player in major league history to hit three doubles in his first major league game. The other is Ben Grieve.

The Mets put Dykstra in his ideal place, the leadoff spot, for his major league debut, and though Mario Soto struck him out to open the game, Dykstra avenged that in his second at-bat with a home run. Dykstra would go 2-for-5 with two RBIs in a 9-4 win and would help solidify the leadoff spot for the next several seasons.

Gentry came within one out of a shutout in his first start against the expansion Expos. He’d settle for a 4-2 win, the first of many productive moments in a championship season, one in which he would start games in both the NLCS and World Series.

Did You Know? The win was a big deal for the Mets in this regard: It made them 2-1, marking only the second time in eight years that they had a winning record through three games.

As one-third of the hyped Generation K combo along with Bill Pulsipher and Paul Wilson, Isringhausen wowed for seven innings against a tough Cubs lineup, allowing only two runs and two hits in seven sharp innings. Isringhausen got a no-decision, but the Mets would win by scoring five runs in the ninth inning.

Yoshii, brought over from Japan in the offseason, threw seven scoreless innings of three-hit ball against the Pirates in his Mets debut. That improved the Mets to 4-1 to start the season.

Did You Know? Yoshii did not allow an earned run in his second start, either. He is the only Mets pitcher to open his career with consecutive appearances of six innings or more and no earned runs allowed.

The Mets had some level of expectations for Schneck, who hit 34 home runs in the minors in 1971 and 24 more in 1972. He’d become the first and only Met to hit cleanup in his debut, and he didn’t disappoint as the day’s right fielder, hitting a two-run homer to give the Mets a sixth-inning lead. Tom Seaver made it hold up for a 3-2 win.

Did You Know? Schneck couldn’t make the initial success last. His .199 career batting average is the second-lowest ever by a Mets position player (minimum 400 at-bats), trailing only Al Weis’ .191.