Mets reverse course, put Duda at first base
8yAdam Rubin
Carrasco has bone fragment removed from elbow
8d
A fans guide to abiding the LOL Mets
22dDevin Gordon
Jeff Passan answers 20 burning questions about the MLB playoffs
22dJeff Passan
What's next for the New York Mets after Luis Rojas' departure
24dBradford Doolittle and David Schoenfield
Mets move on from Rojas after 3rd-place finish
24d
Mets likely to make Rojas decision before others
29d
MLB Power Rankings: Where all 30 teams stand in the final week
28dESPN.com
Mets give Syndergaard start, shut deGrom down
30d
Your squad isn't going to the MLB playoffs? The No. 1 offseason question for each eliminated team
24dBradford Doolittle
Passan's early MLB free-agency tiers: Which stars are going to get paid this winter?
29dJeff Passan
MLB Power Rankings: Where all 30 teams stand as playoff picture comes into focus
35dESPN.com
Prospects who have taken the biggest step forward in 2021 for all 30 MLB teams
37dKiley McDaniel
Jun 17, 2013 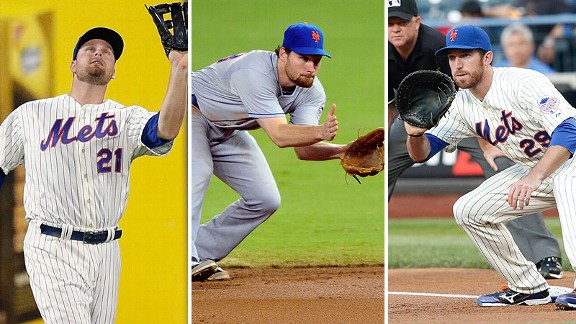 Lucas Duda is the Mets' latest first baseman, following Daniel Murphy and Ike Davis.ATLANTA -- What changed in the past week that now has prompted the Mets to move Lucas Duda to first base, a week after finding that unattractive?

Terry Collins said the staff determined Daniel Murphy at second base, Duda at his natural position, and an outfield of Kirk Nieuwenhuis, Juan Lagares and Marlon Byrd is the "best lineup" at this point.

Said Duda: "I played there most of my amateur career. Hopefully I can just get the job done, and catch the ball and throw it."

One of the reasons for hesitance a week ago that Collins cited was that it would send the wrong message to Ike Davis to move Duda, a natural first baseman and therefore a threat, to that position. Still, Collins insisted, ultimately moving Duda to first base does not signal Davis will be in the minors longer than expected. Davis is hitting .174 (4-for-23) with four walks and seven strikeouts through six Triple-A games.

"Obviously I know it's Ike's position," Duda said. "I'm just there to help out the team any way I can. I don't really feel like there's any awkwardness, I guess."

Collins hopes Duda playing at his natural position will help him at the plate as well. Duda started four games at first base last season, and 41 times overall during his major league career.

"We've taken other guys and said, 'Hey, let's put them where they're comfortable,'" Collins said. "The only guy we haven't done that to is Lucas. So we just said, 'You know what? We'll put him over there. And if Ike gets it going, we'll just put him back in left field.' ... That's where he plays the best. He's excited about being back over there, which I think is a very positive thing. Dan wants to play second. He's happy he's going back to second. We'll just see if it transforms into a productive lineup."

Duda borrowed a first-base glove from Murphy. It's the same one Murphy had borrowed from Justin Turner last week.

Duda had played one spring-training game at first base, but had not been taking grounders at the position in-season except for fooling around on his own for a few minutes one day last weekend at Citi Field. With the tarp on the infield pregame Monday at Turner Field, Tim Teufel hit grounders to Duda in the outfield in lieu of the canceled batting practice session.

The decision ends a run of six straight starts for Jordany Valdespin at second base. Valdespin hit .130 (3-for-23) during that stretch.

"I told Jordany today he's going to become very, very valuable, because the one thing he does very well is come off the bench in big situations," Collins said. "And the other thing is he's going to have to use his athleticism to play around, because right now he's the backup shortstop."