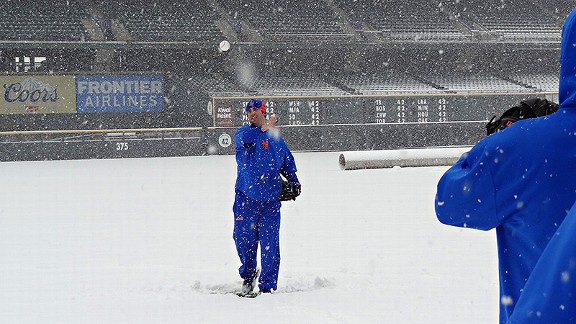 This was the scene as Matt Harvey threw in the snow at Coors Field in April. Now, it's supposed to be in the mid-90s.CHICAGO

FIRST PITCH: What a difference two months makes. The Mets make a cameo appearance in Denver today for the makeup of a postponed game from a snowy April series. The forecast: a high of 94 degrees this afternoon -- 65 degrees warmer than the last visit.

Hefner intended to fly ahead of the Mets to Denver yesterday afternoon, to no avail. Matt Harvey and Dillon Gee did fly directly from Chicago to New York so they can be well-rested for their weekend assignments.

Eric Young Jr. makes his return to Colorado, where he played parts of five major league seasons, after originally being drafted in the 30th round in 2003 by the Rockies. He arrives with a .414 average through 29 at-bats as a Met.

• Shaun Marcum tossed eight scoreless innings and earned his first Mets win after an 0-9 start and the Amazin’s beat the White Sox, 3-0, Wednesday at U.S. Cellular Field for a split of their two-game series.

• Despite stellar numbers at Coors Field, David Wright is due for a day off today.

• The Mets are stalling Ike Davis’ promotion in part because of a string of lefties they continue to face, including at least two against Washington this weekend as well as a pair against Arizona to open next week.

• Ruben Tejada should begin a rehab assignment later this week in the Gulf Coast League, and also will make a stop at Las Vegas before being activated from the DL. The way Omar Quintanilla has performed, including slick fielding plays Wednesday night, Tejada is not assured of being the full-time shortstop upon his return from the quadriceps injury.

• Right-handers Rafael Montero and Noah Syndergaard have been selected to represent the Mets in the Futures Game, which will be held at 2 p.m. on July 14 at Citi Field. Brandon Nimmo is one of five U.S. team finalists that fans can elect to the game. (Vote here.) Mookie Wilson and Edgardo Alfonzo will manage the squads.

• Jonathon Niese is confident he will not need surgery for a partially torn rotator cuff, although that will be for Mets doctors to determine next week in a follow-up exam that will include another MRI.

• Terry Collins will adjust the Mets’ rotation to close the first half, if need be, to ensure Harvey can start the All-Star Game if selected. Read more in the Star-Ledger, Daily News and Newsday.

• Zack Wheeler and Dan Warthen will work during a bullpen session today at Coors Field on eliminating pitch-tipping by the rookie. “I was totally unaware of it,” Wheeler told reporters Wednesday afternoon. “Never done it before. I haven’t seen video or anything of last night, so I really don’t know what I was doing.” Read more in the Record, Journal, Star-Ledger and Newsday.

• Citi Field’s All-Star Game menu was showcased Wednesday at the stadium. Read more in the Star-Ledger.

• From the bloggers … Metsmertized says Wright is on a Hall-of-Fame trajectory when compared with Chipper Jones, Andre Dawson and Ryne Sandberg during their age-30 seasons. … John Delcos at Mets Report believes the team is rushing Wheeler. … Faith and Fear in Flushing finds the Go-Go Mets highly watchable and somewhat plausible.

@bigmetsfan1 Once again, Ruben who? #Mets

YOU’RE UP: How should Terry Collins divvy the playing time between Ruben Tejada and Omar Quintanilla once Tejada returns from the DL?