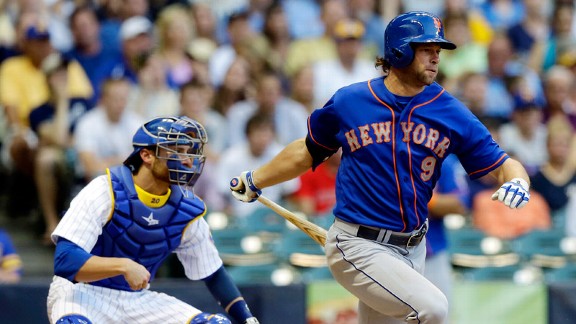 FIRST PITCH: Shaun Marcum faces his former employer on Saturday at 7:15 p.m. ET when the Mets and Milwaukee Brewers continue their series at Miller Park.

Although Marcum experienced tingling in his fingers during his last start and subsequently underwent an MRI on his upper back, Terry Collins said he expected no health impediments to Marcum’s start today.

“Shaun feels great, so I don’t plan on anything happening,” the manager maintained.

Also on tap today: The All-Star teams will be announced at 6:30 p.m. ET. David Wright and Matt Harvey figure to represent the Mets, although the starting pitching assignment is not due to be officially announced by NL manager Bruce Bochy until the day before the July 16 game at Citi Field. 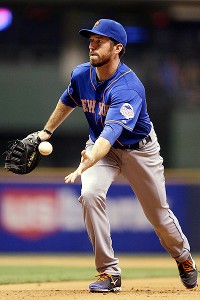 Ike Davis had three hits in his return to the majors Friday.

• Ike Davis went 3-for-5 with two RBIs and a walk in his return to the majors. Davis acknowledged Friday afternoon that his three-plus-week stint in Triple-A was beneficial in quieting his swing. Meanwhile, Terry Collins pledged to continue to find ways to get Josh Satin at-bats, including potentially in the outfield.

• Kirk Nieuwenhuis became the first Met in 13 years to reach base six times in a nine-inning game without benefting from an error and Zack Wheeler notched his second major league win as the Mets beat the sloppy Brewers, 12-5, at Miller Park.

“Just to come in here and not drag our feet and get some momentum after yesterday, that was big for us," Nieuwenhuis said postgame Friday, referring to a 15-inning loss to the Arizona Diamondbacks at Citi Field on Thursday.

• Wheeler next gets to face the Giants -- the organization that traded him to the Mets two years ago. He will oppose Matt Cain on Wednesday at AT&T Park in San Francisco.

As for Friday’s five-inning outing in which he surrendered three runs (one earned) in five innings, Wheeler greatly increased the percentage of fastballs he threw. Wheeler tossed 80 fastballs among his 98 pitches. The heater averaged 95.9 mph and topped out at 97.1 mph.

“I don’t know about command-wise, but I’m feeling more comfortable,” he said. “Command will come once I start settling down a little bit and focus on getting ahead of guys. That’s the biggest thing.”

• A Mets source tells Fox’s Ken Rosenthal the organization would not trade Bobby Parnell unless they are “blown away” by a trade proposal.

• Mike Pelfrey and R.A. Dickey are the opposing pitchers Saturday as the Minnesota Twins and Toronto Blue Jays play, notes David Waldstein in the Times.

• Michael Salfino in the Journal determined the Mets’ .220 average at Citi Field is the seventh-worst in the majors for a team at home since 1921.

• Gonzalez Germen was demoted before Friday’s game without the rookie making a major league appearance to clear a roster spot for the additions of Davis and Greg Burke. Brandon Lyon had been designated for assignment Thursday.

• From the bloggers … With Davis’ promotion, the Mets have important decisions to make, writes John Delcos at Mets Report.

WHY THE HELL IS #mets ALWAYS TRENDING

YOU’RE UP: Do you feel better about Ike Davis returning after seeing Friday’s results?