MILWAUKEE -- Here is all you need to know about Shaun Marcum: Brandon Lyon's fate might be awaiting him sooner than later.

Marcum surrendered six runs and became the quickest Met in 12 years to compile double-digit losses in a 7-6 loss to the Milwaukee Brewers on Saturday night at Miller Park.

Marlon Byrd produced a two-out solo homer in the ninth against ex-Met Francisco Rodriguez, but Kirk Nieuwenhuis struck out to end the game.

The Mets do not have a ton of rotation depth, but Carlos Torres had been highly successful starting with Triple-A Las Vegas before a promotion for relief work. He likely would step in if the Mets decided to designate Marcum for assignment at some point, as they did with Lyon at the end of the last homestand. 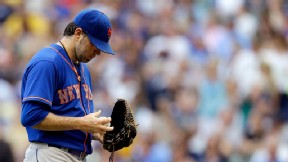 Of course, the DL also is an option perhaps. Manager Terry Collins acknowledged Marcum dealt with tingling in his fingers in his previous start.

The Mets, trailing 5-0, did claw back to within a run multiple times.

John Buck had a solo homer in a two-run fifth against Yovani Gallardo. Buck then produced a two-run single an inning later that pulled the Mets within 5-4. (Buck was not in the original starting lineup, but Marcum requested him over Anthony Recker and Collins made the adjustment.)

After sloppy fielding gave back a run in the bottom half of the sixth, the Mets loaded the bases with one out in the seventh against John Axford. Byrd delivered a sacrifice fly to pull the Mets within 6-5. But Nieuwenhuis, who was 4-for-4 with two walks in the series opener, then lined out to left field.

As for the ugly bottom-of-the-sixth play: After Logan Schafer had a leadoff single, Gallardo tried to bunt him ahead. Marcum fielded the ball in front of the plate and tossed to first base, but Daniel Murphy missed the throw for an E-4. Schafer scampered all the way home as the Brewers took a 6-4 lead that ended Marcum's night.

LaTroy Hawkins surrendered a seventh-inning run -- snapping a streak of 14 appearances without surrendering an earned run -- as Milwaukee took a 7-5 lead. Hawkins was making his 909th appearance, passing Eddie Guardado for 21st all time. Next up: Gene Garber with 931.

Murphy flied out to strand two runners in scoring position a half-inning later.

The day after: In his second day back with the big league club, Ike Davis went 0-for-2 with three walks. He has reached base in seven of 11 plate appearances since his return from Vegas.

Ouch: Nieuwenhuis walked off gingerly after slamming his right knee into teammate Eric Young Jr. on the track in left-center on Young's eighth-inning-ending catch.

What's next: Jeremy Hefner (3-6, 3.54 ERA) opposes left-hander Tom Gorzelanny (1-1, 2.43) in the 2:10 p.m. ET rubber game on Sunday. Wily Peralta originally had been slated for the start, but he will be pushed back two days to allow more time for a hamstring strain suffered in his latest start to heal.

Because the Mets are facing a southpaw rather than a righty, that might afford Collins an opportunity to get Josh Satin a start after two games out of the lineup.