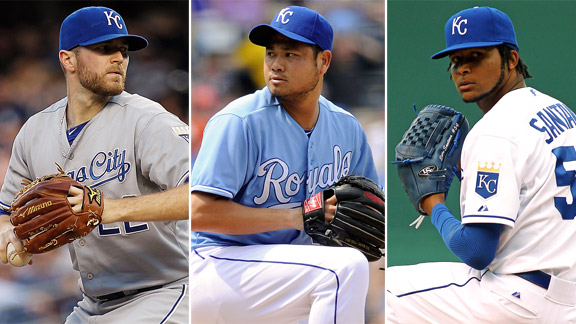 • Kansas City has won nine straight games, the longest active streak in the majors. It is the franchise’s longest winning streak in a decade, since opening the 2003 season 9-0. The Royals nonetheless have not gained much ground in the AL Central because Detroit and Cleveland also are on big winning streaks.

• The Royals acquired outfielder Justin Maxwell from the Houston Astros at the trade deadline for Class A right-hander Kyle Smith. Maxwell, 29, was hitting .241 with two homers overall with Houston. He had a .302 average against left-handed pitchers. 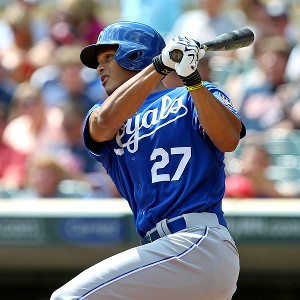 Maxwell made his Royals debut Thursday, going 1-for-3 with an RBI, run scored and walk while starting in right field. He primarily will see action against left-handed pitching and serve as a reserve.

• Maxwell took the roster spot of second baseman Chris Getz, who landed on the disabled list with a knee injury. Miguel Tejada started his fourth straight game at the position Thursday. Elliot Johnson also is an option at second base with Getz sidelined.

• Left-hander Bruce Chen started for the Mets in the first baseball game back in New York after the Sept. 11 terrorist attacks, in the game Mike Piazza belted the two-run homer in the eighth to lift the Mets to a 3-2 win against the Atlanta Braves. Chen limited Atlanta to one run in seven innings that day.

Now 36 years old, Chen has allowed only three runs in 18 innings and opponents have a .115 batting average over three starts since he entered the rotation. Chen had been working out of the bullpen before replacing ineffective Luis Mendoza earlier this month. Mendoza (2-5, 5.21 ERA) has moved to long relief.

• Alex Gordon, who moved from third base to left field three years ago, was a first-time All-Star this season. His 45 RBIs lead major league leadoff men. Gordon has won two Gold Glove awards since the position change.

• 2012 All-Star Billy Butler is the first Royal to have at least a share of the team’s RBI lead for four straight seasons. However, the righty-hitting DH is likely to find himself on the bench this weekend in the NL ballpark. Royals manager Ned Yost indicated Thursday that lefty-hitting Eric Hosmer should start all three weekend games at first base over Butler, since the Mets are throwing three right-handed pitchers.

• Jeff Francoeur was released by the Royals last month and eventually signed with the San Francisco Giants.

• Wade Davis is coming off 7 1/3 scoreless innings against the Chicago White Sox. He was acquired from Tampa Bay last Dec. 9 with James Shields.

• George Brett resigned as co-hitting coach last week and returned to his front-office role as vice president of baseball operations. Brett had assumed the uniformed role alongside hitting coach Pedro Grifol when the Royals were 21-29.