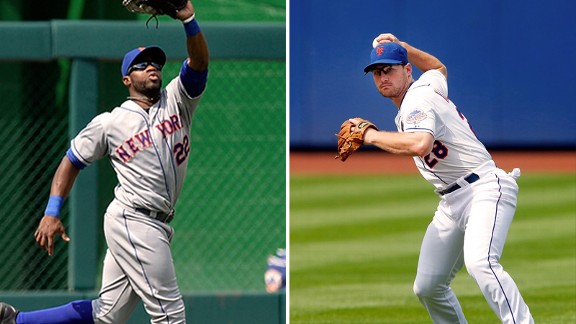 Eric Young Jr. may be moving to second base, with Daniel Murphy shifting to third base.NEW YORK -- Terry Collins is using Justin Turner at third base and Josh Satin at first base Saturday afternoon against the Kansas City Royals.

But, the manager added, Daniel Murphy would be the logical choice to move to third base, with Eric Young Jr. shifting to second base, assuming David Wright's absence for a right hamstring strain is prolonged.

Wright is undergoing an MRI on Saturday morning at the Hospital for Special Surgery in Manhattan after being forced to leave Friday's game in the 10th inning. He was in discomfort after legging out an infield single.

Murphy is a natural third baseman. He last appeared at the position two seasons ago, making 25 starts at third base while Wright was sidelined with a stress fracture in his back.

Young has started one game and appeared in three games for the Mets at second base this season. He has started 45 major league games there.

Shifting Young from left field to the infield actually would open up an outfield spot and unintentionally give the Mets a place to play Lucas Duda once he is activated from the disabled list. Duda began a maximum 20-day rehab assignment for a left intercostal strain on July 24. Duda's locker is set up at Citi Field.