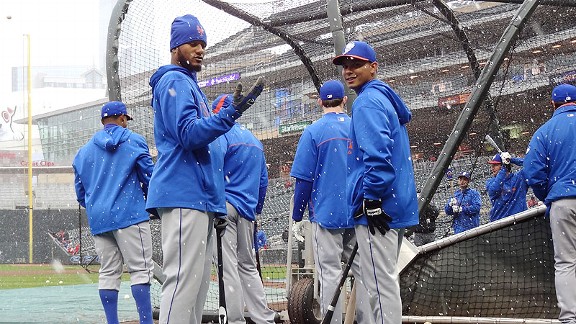 The weather, and the group of players on the roster, were considerably different when the Mets visited Minnesota in April.SAN DIEGO

FIRST PITCH: Snow, then freezing rain during a mid-April visit to Minneapolis forced the postponement of the interleague series finale against the Minnesota Twins during a season-open road trip. So the Mets swing by Target Field today for a makeup game to cap a four-city, 11-game road trip.

The forecast: mostly sunny, with a high of 89 degrees.

• Pedro Feliciano surrendered a walk-off homer to Will Venable and the Mets lost to the Padres, 4-3, Sunday to split their four-game series. The Mets dropped to 13-12 in games started by Matt Harvey this season, despite Harvey limiting San Diego to two runs in six innings. The Mets suffered their 12th walk-off loss of the season, matching the Miami Marlins for the most in MLB.

• Travis d’Arnaud will remain with the major league club once John Buck returns from paternity leave for Tuesday’s homestand opener against the Atlanta Braves, Foxsports.com reported. However, multiple team officials insisted to ESPNNewYork.com on Sunday night that they had not yet committed to that decision, while acknowledging that may very well end up the resolution. D’Arnaud is 0-for-4 with four walks through two games in his major league career.

• Before Sunday’s game, the Mets placed Jenrry Mejia on the disabled list and promoted reliever Greg Burke. Terry Collins expects Mejia will undergo surgery soon to remove a bone spur from his right elbow, giving him ample time to recover for spring training. As for the rotation void, the Mets appeared to be leaning toward skipping the Mejia turn because of Thursday’s off-day and having Harvey pitch on standard rest Friday against the Detroit Tigers at Citi Field.

Harvey throwing only 86 pitches Sunday helps make that feasible. The alternative is for Carlos Torres to make a spot start Friday and Harvey to continue to pitch with an extra day of rest Saturday. Longer term, Collins indicated, September call-ups should plug Mejia’s rotation spot.

• Jeremy Hefner is due for another examination today to determine whether he will require Tommy John surgery for a partially torn medial collateral ligament in his right elbow. Undergoing that procedure would cause Hefner to miss most if not all of the 2014 season.

• Jay Horwitz appeared on WABC-TV to discuss the motivation for his upcoming bobblehead day. Watch here.

Thanks to my "brother from another mother" @Goldberg for stopping by to meet the @Mets guys today! #twins pic.twitter.com/XUMKBpFrUN

YOU’RE UP: Should the Mets forget about innings limits and call up Jacob deGrom or Rafael Montero to take Jenrry Mejia’s rotation spot?