Rapid Reaction: Indians 8, Mets 1
8yAdam Rubin
A fans guide to abiding the LOL Mets
14dDevin Gordon
Jeff Passan answers 20 burning questions about the MLB playoffs
14dJeff Passan
What's next for the New York Mets after Luis Rojas' departure
16dBradford Doolittle and David Schoenfield
Mets move on from Rojas after 3rd-place finish
16d
Mets likely to make Rojas decision before others
20d
MLB Power Rankings: Where all 30 teams stand in the final week
20dESPN.com
Mets give Syndergaard start, shut deGrom down
22d
Your squad isn't going to the MLB playoffs? The No. 1 offseason question for each eliminated team
16dBradford Doolittle
Passan's early MLB free-agency tiers: Which stars are going to get paid this winter?
21dJeff Passan
MLB Power Rankings: Where all 30 teams stand as playoff picture comes into focus
27dESPN.com
Prospects who have taken the biggest step forward in 2021 for all 30 MLB teams
29dKiley McDaniel
Sep 6, 2013

Scott Kazmir had downplayed the significance of his matchup with the Mets, but the organization's 2002 first-round pick rose to the occasion on Friday.

Kazmir, in his first-ever matchup against the Mets nine years after getting traded away for Victor Zambrano, struck out 12 in six scoreless innings. He outdueled current phenom Zack Wheeler as the Cleveland Indians beat the Mets, 8-1, at Progressive Field. 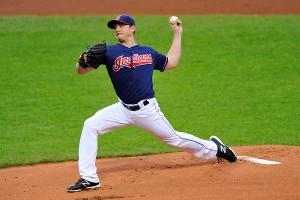 Meanwhile, Wheeler matched a career high by issuing five walks. He suffered his first road loss this season. Wheeler allowed three runs (two earned) while requiring 92 pitches to navigate five innings. He had a streak of five straight quality starts snapped. Wheeler had been 5-0 with a 2.19 ERA in eight starts away from Citi Field.

Kazmir wasn't the only ex-Met to face his former team for the first time. Reliever Joe Smith, traded away in the three-team deal that brought J.J. Putz and Sean Green to Queens during the 2008-09 offseason, tossed a scoreless eighth to preserve a 4-1 lead.

Nick Swisher produced a grand slam against Tim Byrdak in the bottom half of the eighth.

Deep thoughts: Justin Turner hit his first homer of the season, a solo shot in the seventh against reliever Cody Allen to pull the Mets within 4-1. It was Turner’s first homer in 181 at-bats, since last Sept. 25. The longest homer drought on the Mets belongs to Omar Quintanilla, who has gone 246 at-bats since his last homer.

Hurting: Wilmer Flores' ankle buckled and he grimaced during his first at-bat, but he completed the game. Flores had been out of the starting lineup for four of the past five games, and clearly is playing through discomfort that also restricts his mobility. He is 1-for-his-last-23.