FIRST PITCH: The Mets return home for 11 games, beginning with a series against the Washington Nationals.

The Nats (73-69) are on the precipice of being KO’d from postseason contention. They trail the Atlanta Braves by 12 games in the division and the Cincinnati Reds by eight games for the second wild-card spot with only 20 games remaining. 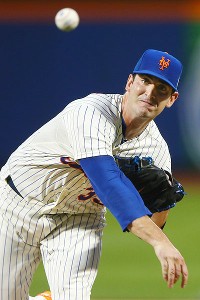 • Matt Harvey is due to see Dr. James Andrews this week for a second opinion regarding whether he will require Tommy John surgery. Sandy Alderson stated as early as the initial press conference that Harvey likely would seek a second opinion, and likely with Andrews. The second opinion signals Harvey already has been reexamined by Mets doctors. Alderson’s tone consistently has suggested that he expects Tommy John surgery will be required for the torn ulnar collateral ligament. Read more in the Star-Ledger, Daily News and Record.

• Frank Francisco, who coaxed a double play and earned the win in his first major league action this season on Sunday, says he legitimately was injured. Francisco pointed to receiving Platelet Rich Plasma Therapy and cited a flexor pronator muscle tear in his elbow as an indication he had a real issue.

“I got nothing to be ashamed of because I know how hard I’ve worked,” Francisco told reporters. “I’m a fighter. I never stopped, and I don’t do it just to make everybody happy. I do it for myself, and to be satisfied with me -- because besides baseball and everything, I’ve got three children, a wife, I have my family back in the Dominican and all those people depend on me.”

Read more in the Post, Star-Ledger, Daily News and Newsday.

Ruben Tejada’s promotion apparently will wait. If the Mets stall promoting Tejada, they will delay his free-agency eligibility from after the 2016 season until after the 2017 season. A Tuesday call-up would give Tejada two years, 171 days of service time at the end of the season. Credit for a full MLB season comes at 172 days.

Harang, 35 , went 5-11 with a 5.76 ERA in 22 starts with the Seattle Mariners this season. He made two appearances for Triple-A Las Vegas, including allowing three runs on six hits and two walks in six innings against Salt Lake on Saturday as the Los Angeles Angels affiliate eliminated the 51s in Game 4 of their Pacific Coast League series. Harang’s services are needed with the Mets having a doubleheader on Saturday against the Miami Marlins, and with Zack Wheeler facing an innings limit.

Centeno, 23, hit .305 with no homers and 28 RBIs in 213 at-bats with the 51s this season. He was a 32nd-round pick out of high school in Puerto Rico back in 2007 and needed to be added to the 40-man roster or he would have become a minor league free agent this offseason. (That free-agency eligibility if he is not added to the 40 also is true for fellow Triple-A catcher Francisco Pena, the son of five-time All-Star Tony Pena, who has not been called up.)

• David Wright should be with the Mets today, although he is not game-ready. Wright was due to return to New York because activity had all but ceased at the Mets’ Port St. Lucie, Fla., complex.

• Eric Young Jr.’s ninth-inning double against Chris Perez plated Matt den Dekker with the tiebreaking run and the Mets avoided getting swept in Cleveland with a 2-1 win against the Indians on Sunday. Daisuke Matsuzaka took a scoreless effort into the sixth and ultimately was charged with one run in 5 2/3 innings.

Read game recaps in the Post, Times, Star-Ledger and MLB.com.

BIRTHDAYS: Player-turned-producer Todd Zeile is 48. … Mike Hampton, who loves the schools in Colorado, and whose defection from the Mets provided the draft pick used for Wright, turns 41. … Kazuhisa Ishii is 40.

Pic from winning the South division last night! Little too much shaving cream used on me haha pic.twitter.com/37d1Bdv1sa

YOU’RE UP: Should David Wright still be trying to return this season? Or should he just shut it down?