Zack Wheeler shut down for season
8yAdam Rubin
Carrasco has bone fragment removed from elbow
7d
A fans guide to abiding the LOL Mets
21dDevin Gordon
Jeff Passan answers 20 burning questions about the MLB playoffs
21dJeff Passan
What's next for the New York Mets after Luis Rojas' departure
23dBradford Doolittle and David Schoenfield
Mets move on from Rojas after 3rd-place finish
23d
Mets likely to make Rojas decision before others
28d
MLB Power Rankings: Where all 30 teams stand in the final week
27dESPN.com
Mets give Syndergaard start, shut deGrom down
29d
Your squad isn't going to the MLB playoffs? The No. 1 offseason question for each eliminated team
23dBradford Doolittle
Passan's early MLB free-agency tiers: Which stars are going to get paid this winter?
28dJeff Passan
MLB Power Rankings: Where all 30 teams stand as playoff picture comes into focus
34dESPN.com
Prospects who have taken the biggest step forward in 2021 for all 30 MLB teams
36dKiley McDaniel
Sep 21, 2013

PHILADELPHIA -- Zack Wheeler experienced stiffness in his pitching shoulder during his last start, so Mets officials have decided to shut down the rookie for the season. 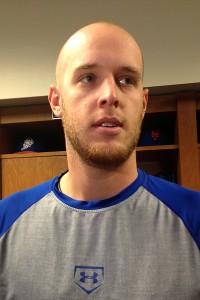 Zack Wheeler discusses being shut down for the season on Saturday afternoon in Philly.

Terry Collins said the Mets do not believe there is anything medically wrong with Wheeler. They simply believe the stiffness cropped up because he is roughly 20 innings over his 2012 total.

Rather than let Wheeler proceed with one to two more starts, the Mets decided to end Wheeler's season. Wheeler wanted to proceed with a bullpen session in Philadelphia on Saturday in preparation for his originally scheduled start Monday in Cincinnati, but GM Sandy Alderson and Collins did not grant permission, according to the manager.

"With what's happen with Matt [Harvey], it's not the time to take chances right now," Collins said. "So one more start is not going to mean that much."

Said Wheeler: "It was a group decision. I'm 20 innings over what I had last year. It's a little stiff, so we're just being cautious."

Wheeler said he is not scheduled for any MRIs or exams with doctors. He will just get regular treatment from team trainers.

"I made big jumps in my game," Wheeler said.