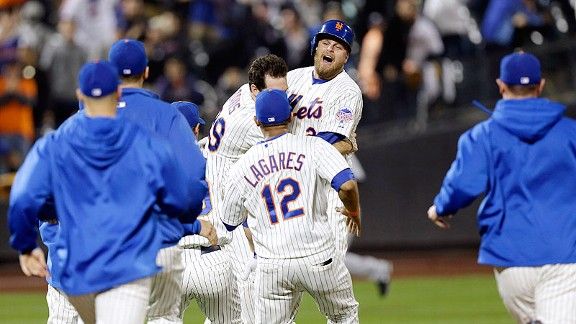 The Mets were a jubilant group after a walk-off win against the Yankees.The Mets finished 74-88 for the second straight season, but this year had more of an upbeat feel to it than 2012, with come-from-behind wins, some prospects heralded and unheralded coming to Citi Field, and plenty of exciting wins as the Mets went 49-48 in their last 97 games.

We're not looking to sugarcoat what was another rough year for Mets fans (particularly once Matt Harvey got hurt). But the good times should be remembered.

Here is a chronological look at the Mets most memorable moments of 2013.

The Mets had 10 walk-off wins in 2013 and one of the most exciting ones came when they rallied to beat the Dodgers.

David Wright tied the game and kept Matt Harvey's unbeaten record intact with a two-out hit in the ninth inning. Jordany Valdespin won it with a 10th inning grand slam.

Stat to Remember: This was the sixth walk-off grand slam in Mets history, the first since Kevin McReynolds hit one against the Expos in 1991.

May 3 -- Wright goes deeper than ever before

The Mets scored a dramatic 7-5 win over the Braves. Trailing by a run in the ninth inning, Wright took invincible Braves closer Craig Kimbrel deep.

The 464-foot homer marked the longest one in Wright's career. They would pull ahead in the 10th inning on a pair of 0-2 RBI hits, one by Ruben Tejada, the other by Daniel Murphy.

Stat to Remember: The Mets won seven games in which they were trailing entering the ninth inning, their most such wins in a season since they had seven in 1998.

Matt Harvey pitched a lot of great games in 2013 (an early-season win over Stephen Strasburg just missed our cut). His best was his nine scoreless innings against the White Sox, a game in which the only baserunner he allowed was an infield single by Alex Rios in the 7th.

Harvey would get a no-decision (a theme throughout 2013) in a game the Mets would win on a walk-off hit in the 10th inning by Mike Baxter.

Stat to Remember: Harvey is the only pitcher in Mets history to throw nine scoreless innings, allow one hit or fewer, strike out at least 12 and walk none.

The Year in Metrics
Notes from 2013

There were minimal expectations for the Mets heading into their four-game series with the Yankees. But the Mets pitching dominated, allowing only one run in three of the four games, winning all four.

Murphy won the opener with an eighth-inning hit, then started an improbable two-run rally in the ninth inning with a leadoff double in a 2-1 walk-off win against Mariano Rivera the next day.

The Mets bats had one really good day, knocking out David Phelps in the first inning of a 9-4 romp. Dillon Gee closed the series with an unlikely 12-strikeout gem that turned his season in the right direction.

Stat to Remember: This was the first time in Mets history that they swept the Yankees in a season series.

Terry Collins would point to this game, not Harvey/Wheeler day (the next on our list) as the one that got the Mets headed out of their early-season doldrums.

Trailing 3-0 in the ninth inning, the Mets were the recipients of an implosion from Cubs closer Carlos Marmol, who first gave up a leadoff homer to Marlon Byrd, then allowed a three-run walk-off shot to Kirk Nieuwenhuis, who entered that at-bat 3-for-31 for the season.

Stat To Remember: This marked the second time in the last 30 seasons that the Mets won a game on a walk-off homer that game with them down by at least two runs. The only other instance in that span was Bobby Bonilla's game-winning homer against Rob Dibble and the Reds on August 30, 1992.

This marked the brightest-looking day for the Mets future when Harvey and Zack Wheeler beat the Braves in a doubleheader sweep.

Harvey struck out 13 and took a no-hit bid into the seventh inning of the opener. Wheeler wowed in his debut with six scoreless (albeit a little wild) innings in the nightcap.

Those wins started the 49-48 season-ending run.

Stat to Remember: This marked the Mets first doubleheader sweep of the Braves in Atlanta since 1987.

The game might have actually gone longer had Brandon Crawford cleanly fielded Anthony Recker’s grounder with runners on the corners and two outs in the 16th, which produced the winning run. The teams combined to go 2-for-24 with runners in scoring position.

Harvey proved he belonged on the game's biggest stage when he started the All-Star Game for the National League at Citi Field. After allowing a leadoff double to Mike Trout and hitting Robinson Cano, Harvey retired the heart of the American League lineup (Miguel Cabrera, Chris Davis and Jose Bautista), then pitched a 1-2-3 second inning, highlighted by a 10-pitch strikeout of Adam Jones.

Stat to Remember: Harvey became the second Met to throw at least two scoreless innings as an All-Star Game starter. The other was Tom Seaver in 1970.

In the eighth inning of a tie game against the Rockies, Eric Young Jr. brought back memories of Mookie Wilson scoring from second on an infield single by Juan Lagares. That would give the Mets a win and a nice moment for Young, who was traded from the Rockies to the Mets earlier in the season.

Stat To Remember: The Mets led the majors in Fangraphs' advanced baserunning metric (UBR) due largely to plays like the one that won this game.

Wright homered in his first at-bat against Cole Hamels after missing seven weeks with a hamstring injury and passed Mike Piazza into second place on the club's career home run list. The Mets would go on to sweep the Phillies in Philadelphia, those wins making the difference as they finished in third place in the NL East, one game ahead of the Phillies.