FIRST PITCH: We already have noted that whether the Mets finish with a protected or unprotected draft pick appears largely immaterial. That is because, with the exception of Shin-Soo Choo, team insiders suggest the club does not intend to pursue the free agents with draft-pick compensation attached anyway.

With two games to go in the season, the Mets (73-87) are in a three-way tie with the Milwaukee Brewers and Toronto Blue Jays for the ninth-worst record in MLB.

The tiebreaker is the 2012 winning percentage.

There are only two other teams outside the top 10 within two games of the Mets in the standings -- and neither can displace the Mets from the top 10.

The San Francisco Giants and San Diego Padres each are 75-85. But both had better winning percentages than the Mets in 2012. So even if the Mets win their final two games and one of those teams loses both, the Mets would get the tiebreaker.

So from a Mets perspective, it boils down to this: Only the Brewers can bump the Mets from a protected pick.

And the only way that can happen is if the Mets win the final two games in the head-to-head matchup, since a split and tie in the standings means the Mets select first.

“I’m not trying to lose games, I can honestly tell you that,” Collins said pregame Friday. “I’m trying to win baseball games. I don’t care what time of the year it is. We’re trying to teach people how to win here, because we plan on winning down the road.”

By the way, MLB Trade Rumors identifies the free-agent outfielders likely to receive qualifying offers (one year at somewhere about $14 million) as Choo, Jacoby Ellsbury, Hunter Pence and Curtis Granderson. 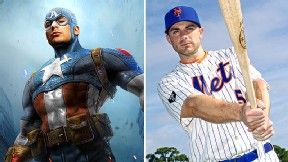 • David Wright skipped Friday’s game not because of the jolt to the head he experienced in the beaning in the series opener, but due to a swollen right thumb suffered because of his landing. Asked if he intended to play Saturday, Wright said: “I hope.”

Terry Collins said pregame that he believed when Wright gets to retirement age, the captain will be viewed by Mets fans just as Mariano Rivera is viewed in the Bronx.

“I think when David Wright’s days are done here, he’ll be thought of in that light,” Collins said. “He’ll hold every record there is in this organization. He’ll have every offensive record there is. And I know one of the things you’ve heard and mentioned so many times [during the Yankee Stadium ceremony] was Mariano Rivera off the field, how he is in the clubhouse, how he is in real life. This guy is the same way.’’

Read more in the Daily News, Record and Times.

The GM did say Travis d’Arnaud’s injury track record likely would prompt him to seek a bona fide alternative who could handle the majority of the duty if the rookie became injured.

Alderson also indicated that right now he can only count on three starting pitchers next season: Jonathon Niese, Zack Wheeler and Dillon Gee. (A team official said Matt Harvey, rules-wise, would be permitted to test his elbow in the Arizona Fall League. That’s because Harvey has less than two years of service time and missed time due to injury.)

• The Mets handed out their Sterling Awards to top minor league performers before Friday’s game.

First baseman Allan Dykstra and catcher Kevin Plawecki were named co-players of the year. Right-hander Gabriel Ynoa was named pitcher of the year.

Boyd did not attend the ceremony. He recently underwent surgery for thoracic outlet syndrome. He had been limited to DH rather than first base after June 28 because the shoulder/neck issue prevented him from throwing.

Read a write-up on the 2013 first-round pick Smith here and on Syndergaard here.

• Carlos Torres allowed two first-inning homers and Daniel Murphy was thrown out trying to score from third base on a would-be wild pitch with the bases loaded in the sixth as the Mets lost to the Brewers, 4-2, Friday. Murphy said he made the mistake of initially being indecisive and should have aborted the attempt. Torres curiously threw a ball into the upper deck at the end of one half-inning on the mound. He said postgame he does it all the time, having not had a seat close to the field when he was a fan.

• Read more on the draft-pick issue from Jorge Castillo in the Star-Ledger.

• From the bloggers … John Delcos at Mets Report believes Collins should be more tactful in answering sensitive questions.

Words can't describe how blessed and thankful I am for the NYM for making these past 2 days a truly amazing experience! Still in awe of it

YOU’RE UP: Which Sterling Award winner will have the best major league career?