"I've become pretty close with Matt, and we've been talking over the last few months, and especially the last week or so. I'll put it this way: If it was me in the same situation, I'd do what he's doing," Wright told ESPNNewYork.com. "The last thing you want is you are a No. 1 starter, you've been as dominant as you've been, and you take the mound every fifth day and in the back of your mind you know that on any given pitch it could go. Your velocity is down that day and all of a sudden you start wondering, 'Is this the day?' Your forearm gets tight and you have those doubts in the back of your head. For me, this is the right decision. 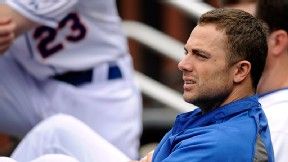 "I know he was fighting -- going back and forth with himself -- trying to figure out what the best situation would be. But I think this is best for us as an organization, and I think it's best for him personally. So it's almost a sense that you're relieved, because the decision has been made. You know exactly when he's going to be pitching again. And you go from there."

Asked if the Mets now definitely need to add two starting pitchers, or whether one could be handled with a prospect such as Rafael Montero, Jacob deGrom or Noah Syndergaard, Wright added: "I'm not sure if they're ready. I don't know how far they've progressed this year to say whether they're going to be ready to make the team out of spring next year, or if they want them to develop. If they want to let them to develop, obviously we need to fill those five spots. And if those guys aren't ready, we've got to get pitchers from somewhere.

"But the thing also is, at least as far as I'm concerned: We knew Harvey was going to be good coming into this year. We didn't know he was going to be as dominant. So I think the plan is still moving forward to get much better next season. And then when Harvey is ready to come back, probably 2015, it's almost like making a huge, blockbuster trade the offseason before that getting a No. 1 starter.

"Obviously, selfishly, I want to win, so this isn't good news on that front. But, at the same time, it's good that now we get this thing fixed and we don't have to deal with it again."