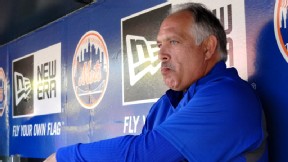 The Mets have not been asked by any other organization for permission to speak with Wally Backman about a managerial vacancy. So team officials still expect Backman to return as Triple-A Las Vegas manager in 2014, an insider told ESPNNewYork.com.

The source could not yet guarantee Backman's return, noting it still would be possible that a newly hired manager elsewhere might want Backman on the major league staff as a coach. But, for now, the Mets fully expect Backman to continue managing the 51s next season.

In its first year as a Mets affiliate, Backman-led Las Vegas won its Pacific Coast League division with an 81-63 record before getting eliminated in the first round of the playoffs.

The Mets return their entire major league staff in 2014, leaving no room for a promotion for Backman.