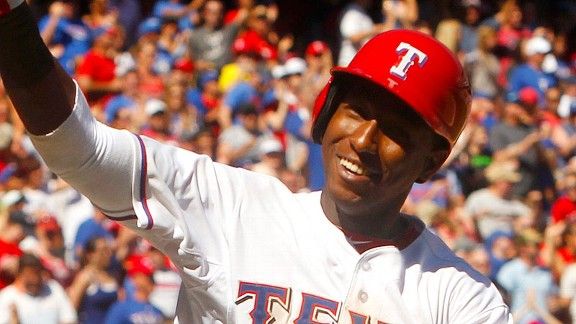 Jurickson Profar would be an appealing player for the Mets to pursue.

This offseason will be a pivotal one for the Mets as the team has both money to spend and needs to fill. But not all will be solved by shopping for free agents. Sandy Alderson may have to make a trade or two to net the kind of player the Mets want and need.

Among those they would have interest in are Carlos Gonzalez and Troy Tulowitzki from the Rockies and Giancarlo Stanton from the Marlins. But those players are not on the market.

Who might be available from a “pie in the sky” perspective for you to pine for this winter? The past two days, we’ve weighed in on the top potential hitter and pitcher trade targets. Today we look at the top potential prospect and allow you to weigh in on whether Alderson should make the call to pursue a deal.

Why he would be available: The Rangers have two legit players who both play shortstop in Profar and Elvis Andrus. They have other needs to fill as they try to avoid a repeat of the past two seasons in which they were eliminated in the wild-card game, and the one-game tiebreaker.

“Profar is the best prospect in the minors this year thanks to an incredible combination of tools, skills and baseball instincts rarely found in players who play in the middle of the field. His feel for the game is unusual for a player of any age, much less a teenager, and should put another nail in the coffin of the old saw that American-born players have better instincts.”

Profar is all about potential. He averaged 13 homers and 20 steals in full seasons in Single-A and Double-A in 2011 and 2012. There aren’t a lot of shortstops who can do that in the major leagues.

However, it’s not as though Profar was wildly swinging. His chase rate was just a hair more than major-league average, and his rate of missing on swings was only 16 percent, 6 percentage points less than league average.

Cons: There is always the possibility that Profar’s potential goes unfilled.

While it’s likely that Profar would improve significantly upon those numbers as he gets comfortable in the major leagues, there is no guarantee. The Mets would be putting a lot of reliance on Profar and Travis d'Arnaud, two players high on potential at up-the-middle positions.

The cost: Herein lies a huge obstacle for the Mets. The Rangers are looking to trade for players that can help them win now. Profar could be a key player in a deal for someone like the Rays ace, Price.

The Mets would have a hard time competing with that unless the Rangers were really enamored with someone like Zack Wheeler.

Should Sandy “make the call?” There’s no harm in inquiring about Profar, though the Rangers would probably steer the Mets toward Andrus. The problem there is a financial one: Andrus is making about $6.5 million in 2014, but then will receive either $14 million or $15 million in each of the next eight years.

What do you think? Should the Mets pursue a trade for Jurickson Profar, and if so, what should they give up? Share your thoughts in the comments.