NEW YORK -- Sandy Alderson said the Mets would have liked to re-sign LaTroy Hawkins for 2014. But the GM acknowledged being unwilling to offer the $2.5 million the Colorado Rockies guaranteed to sign the reliever.

Alderson said there were two factors in making a more modest offer: Hawkins turns 41 years old next month. And the Mets were unlikely to have used Hawkins in a closer's role, so they did not want to allot that type of money to him. 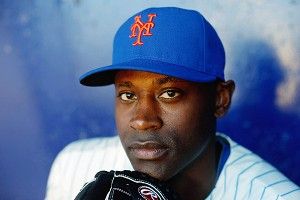 LaTroy Hawkins has signed with the Rockies.

"LaTroy had a great season for us last year," Alderson said. "He stepped in and did a very nice job for us as a closer. He's 41 years old. We weren't necessarily counting on him to fulfill the same role for us next year. We certainly would have liked to have had him in the pen. But going into spring, I think given the vagaries of relief pitching anyway, and his age, and what we have coming -- it wasn't clear what his role would be -- I think we made an offer consistent with that."

Alderson believed Hawkins went for the most money -- not for where he would have an opportunity to close. In fact, Terry Collins had said last season that Hawkins was not eager to close once Bobby Parnell suffered a season-ending herniated disk.

"I hate to keep emphasizing he's 41, but at that age, in this game, I think the financial issue becomes not paramount in every case, but I think important," Alderson said. "Because Colorado saw him in a particular role, they went to that level that they did.

"I believe, based on what I read, he was signed to be the closer, or part of a closer committee. We did make an offer to LaTroy. We're feeling more and more comfortable about the young pitching that we have that may populate the bullpen next year."

Parnell is expected to be fine for next season. If he were unable to close, Alderson said, "right now" Vic Black is the alternative.