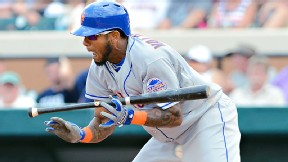 Jordany Valdespin has been cut loose by the Mets.

Jordany Valdespin's troubled tenure with the Mets has ended. Valdespin has been non-tendered by the Mets, a source told ESPNNewYork.com.

Scott Atchison and Omar Quintanilla were cut loose earlier in the day.

Valdespin had plenty of flair, and his signature moment came with a pinch-hit homer against Philadelphia Phillies closer Jonathan Papelbon. But he also had plenty of drama that agitated teammates and Terry Collins. That came to a head in Pittsburgh last season when Valdespin, upset at being demoted, lashed out at Collins. Sandy Alderson was present at PNC Park that day.

He was not yet eligible for arbitration.