LAKE BUENA VISTA, Fla. -- Sandy Alderson insisted on Wednesday that he will not give Ike Davis away. 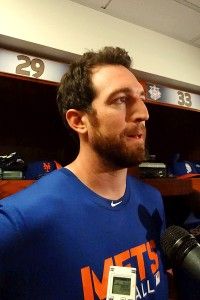 So if the Milwaukee Brewers, Tampa Bay Rays or Pittsburgh Pirates do not come up with a significant offer in return for the first baseman, the Mets will just keep Davis, according to the GM.

"Let me emphasize one thing: We're not in the business of giving players away," Alderson said. "We don't expect to get in that business."

The stance came on a day the Seattle Mariners acquired a pair of first basemen -- Corey Hart as a free agent and Logan Morrison in a trade with the Miami Marlins.

The Mets still have competition on the supply side of the first-base market, with Texas' Mitch Moreland and now Seattle with Justin Smoak.

"It does reconfigure the market somewhat for first basemen," Alderson said about the Mariners' additions. "But how it plays out will not be a function of how we analyze it. It's how it plays out. So it may take a while for that to happen."

Asked if Davis trade talks may drag on beyond this week, Alderson said: "It's possible."