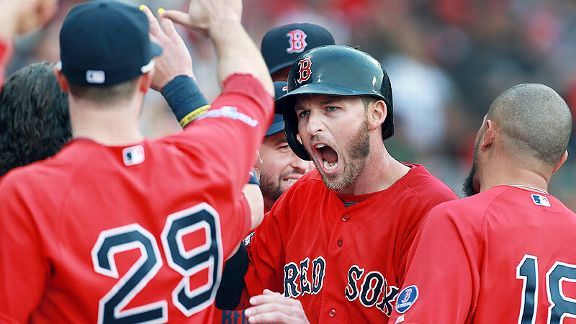 The Mets are open to signing Stephen Drew to a short-term deal, but not expecting it to materialize.The Mets remain engaged with agent Scott Boras about free-agent shortstop Stephen Drew, but a source familiar with the process continues to portray Drew as more of a "possibility" than a "probability."

Team officials are divided about how valuable Drew would be to the Mets, who otherwise appear prepared to use Ruben Tejada at shortstop.

The team would be more willing to consider a one- or two-year deal for Drew at the right monetary figure, while likely being averse to anything three years or beyond. But if Drew were to accept a shorter-term deal, the feeling is that he ultimately would just return to the Boston Red Sox. So there is some belief within the Mets organization that Boras partly is engaging the Mets in order to maximize the terms with Boston.

The Mets' first-round pick is protected in 2014 and the second-round pick has been forfeited to the Yankees for signing Curtis Granderson. So the Mets would lose a third-round pick if they were to sign Drew -- something they are not totally averse to considering.

The Mets partly are downplaying their interest in Drew because they do not want to get the fan base excited and then seem to fail in pursuing a player they believe ultimately will end up back with the Red Sox anyway.

A team insider does not believe the Mets would need to first shed payroll -- Ike Davis and/or Daniel Murphy -- in order to free available space for Drew.