Who's on first? Mets expect Ike in camp
8yAdam Rubin
A fans guide to abiding the LOL Mets
11dDevin Gordon
Jeff Passan answers 20 burning questions about the MLB playoffs
11dJeff Passan
What's next for the New York Mets after Luis Rojas' departure
13dBradford Doolittle and David Schoenfield
Mets move on from Rojas after 3rd-place finish
13d
Mets likely to make Rojas decision before others
18d
MLB Power Rankings: Where all 30 teams stand in the final week
17dESPN.com
Mets give Syndergaard start, shut deGrom down
19d
Your squad isn't going to the MLB playoffs? The No. 1 offseason question for each eliminated team
13dBradford Doolittle
Passan's early MLB free-agency tiers: Which stars are going to get paid this winter?
18dJeff Passan
MLB Power Rankings: Where all 30 teams stand as playoff picture comes into focus
24dESPN.com
Prospects who have taken the biggest step forward in 2021 for all 30 MLB teams
26dKiley McDaniel
Jan 5, 2014 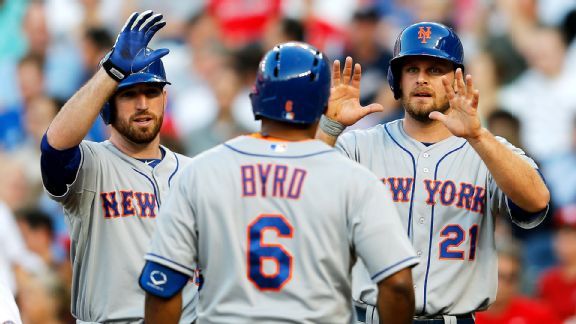 Ike Davis and Lucas Duda may both be in spring training with the Mets after all.Can anyone say awkward?

Mets insiders now expect Ike Davis will be in spring training with the team in Port St. Lucie, Fla. -- while cautioning they are willing to reengage the Pittsburgh Pirates or Milwaukee Brewers or any other club in search of a first baseman in trade talks in the six weeks before pitchers and catchers report on Feb. 15.

Sources add that Davis genuinely does want to remain with the Mets.

Of course, there is a difference between Davis coming to spring training and making it all the way to Opening Day.

Mets officials largely project Lucas Duda as having the better long-term potential, but are not averse to Davis being the first baseman in 2014.

If both players were on the Opening Day roster, there technically would be a first-base competition during spring training. Still, Davis likely would get the bulk of the early season duty. After all, while Duda has significant home-run potential, Davis has hit 32 homers in a season as recently as 2012.

A surplus at the position is viewed as a good problem to have by team officials.