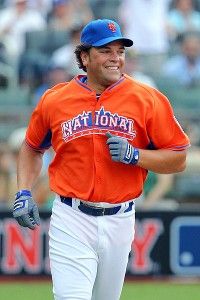 The Hall of Fame will announce its 2014 class at 2 p.m. Wednesday, and things are looking worse and worse for Mike Piazza making the cut.

As more ballots become public, Piazza's total has slipped to 68.6 percent of ballots cast, according to Baseball Think Factory. The site has tabulated 194 public ballots so far, which should represent more than one-third of the total that were cast.

A player nears to appear on 75 percent of ballots to get elected.

It's looking like Greg Maddux (99.5 percent, based on the site's review), Tom Glavine (95.4 percent) and Frank Thomas (89.7 percent) should comfortably be elected. Craig Biggio (78.4 percent) is too close to call.

Whichever players are elected will join Joe Torre, Bobby Cox and Tony La Russa this summer in the induction ceremonies in Cooperstown. Those retired managers were voted in by a veterans committee, which considers people no longer eligible for BBWAA election.