Mets refute Japanese report on Dice-K
8yAdam Rubin
A fans guide to abiding the LOL Mets
14dDevin Gordon
Jeff Passan answers 20 burning questions about the MLB playoffs
14dJeff Passan
What's next for the New York Mets after Luis Rojas' departure
15dBradford Doolittle and David Schoenfield
Mets move on from Rojas after 3rd-place finish
15d
Mets likely to make Rojas decision before others
20d
MLB Power Rankings: Where all 30 teams stand in the final week
20dESPN.com
Mets give Syndergaard start, shut deGrom down
21d
Your squad isn't going to the MLB playoffs? The No. 1 offseason question for each eliminated team
16dBradford Doolittle
Passan's early MLB free-agency tiers: Which stars are going to get paid this winter?
21dJeff Passan
MLB Power Rankings: Where all 30 teams stand as playoff picture comes into focus
27dESPN.com
Prospects who have taken the biggest step forward in 2021 for all 30 MLB teams
29dKiley McDaniel
Jan 14, 2014 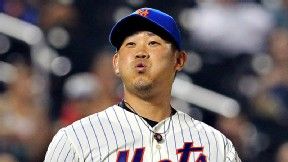 There's no deal between Daisuke Matsuzaka and the Mets, despite a report out of Japan, according to team officials.

Mets officials refuted a Japanese report from Sports Hochi that Daisuke Matsuzaka was on the verge of agreeing to a minor-league deal with the club, with one member of the organization saying it was "not true at all."

The Mets previously have acknowledged being in the market for a fifth starter on a minor-league contract to compete with Jenrry Mejia and prospects such as Rafael Montero and Jacob deGrom.

He had appeared in danger of release early on, when he had a 10.95 ERA through three starts. But Matsuzaka then rallied to produce a 1.37 ERA in four starts the remainder of the season.