Lannan, Dice-K have June outs if not in bigs
7yAdam Rubin
MLB playoff push: See the bracket now that 16-team postseason field is set
3dMLB Insiders
What's next for the teams that didn't reach the MLB playoffs
4dCraig Edwards
Conforto's season over as Mets place OF on IL
6d
Alderson to be Mets president if sale approved
6d
Ranking the pitching staffs of every potential MLB playoff team
6dBradford Doolittle
Rockies put Arenado on IL with sore left shoulder
9d
Everything you need to know for final week of the MLB season
9dDavid Schoenfield
Longtime baseball pro scout Hughes dies at 79
11d
MLB Power Rankings: The 2020 MVP for all 30 teams
9dESPN.com Staff
Lure Brian Cashman from the Yankees? Why it could be Steve Cohen's first move as Mets owner
11dBuster Olney
Mets' deGrom exits early with hamstring spasm
14d
Ranking top MLB rookies of 2020: Who has made the biggest splash?
13dJay Jaffe
Olney: Potential winners and losers in sale of Mets to Steve Cohen
14dBuster Olney
Jan 30, 2014 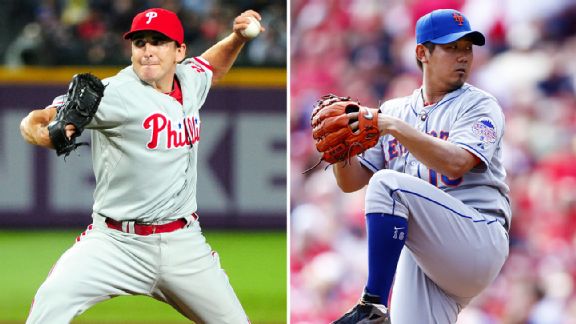 Lannan's representatives negotiated a June 14 opt-out if he remains in the minors and desires free agency at that point, sources told ESPNNewYork.com.

Dice-K, because he has six-plus years of MLB service and re-signed with the Mets as what is known as a XX(B) free agent, automatically receives certain rights: The Mets must inform him five days before Opening Day that he has made the team; otherwise, the Mets must release him, or pay him a $100,000 retention bonus to send him to the minors. Dice-K also automatically gets a June 1 "out" in his contract as part of the CBA if he is not promoted to the majors by then and wants free agency.

Matsuzaka's agent was free to negotiate more favorable terms or other outs, but the CBA stipulates the June 1 out, five days' notice of making the Opening Day roster, and the $100,000 retention bonus are the minimum protections based on signing a minor-league contract with his stature. Matsuzaka's agent did not negotiate additional protections, a source told ESPNNewYork.com.

Each pitcher reportedly receives $1.5 million base salary if he makes the big-league team.

Lannan, Matsuzaka and Jenrry Mejia (who has a minor-league option remaining) are the primary competitors for the fifth-starter's job behind Bartolo Colon, Jonathon Niese, Zack Wheeler and Dillon Gee. Officially, prospects Jacob deGrom and Rafael Montero also will compete for that rotation role. Noah Syndergaard is expected to remain at Triple-A Las Vegas until at least after the Super 2 deadline (a floating date, likely in July) in order to delay his arbitration eligibility.