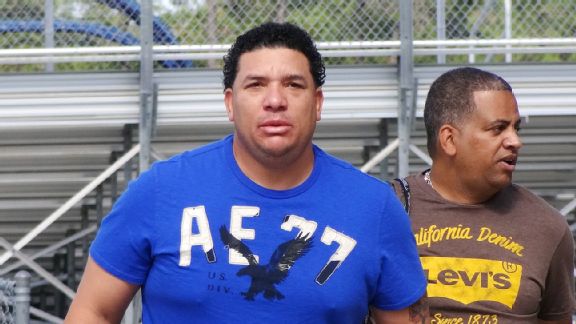 "I really left it up to my agent. I trusted in him to find a good team that would be a good fit for me," Colon said in Spanish through an interpreter. "... Other teams had one-year offers. The second year really sealed the deal for me with the Mets."

"I was a little surprised as well," Colon said about the product, which included the second-best ERA in the American League.

How much longer can the right-hander, who turns 41 on May 24, perform at that level?

"Until my body can't take it any more," Colon said.

Listed at 265 pounds by the Mets, Colon indicated that is not a concern.

"I'm not worried about my weight," he said. "I've always been a big guy and I've always pitched that way. I'm comfortable with that."

Colon has not been in the National League since 2002 with the Montreal Expos. He said about having to again regularly handle the bat and run the bases: "I'm just going to be working on my batting. I think that once I get comfortable with that, I'll be doing just fine in the league."

"I was concerned that I might not return, but I was confident that if I did I could do very well," Colon said. "... It was a great experience with the Yankees. To me, ultimately just being back in New York just means a lot because I've got my family nearby."

That includes his wife and son living in New Jersey.

"It's very cold right now," said Colon, who undoubtedly is preaching to the choir with that comment.