Mets line up rotation for 1st series
8yAdam Rubin
Carrasco has bone fragment removed from elbow
7d
A fans guide to abiding the LOL Mets
21dDevin Gordon
Jeff Passan answers 20 burning questions about the MLB playoffs
21dJeff Passan
What's next for the New York Mets after Luis Rojas' departure
23dBradford Doolittle and David Schoenfield
Mets move on from Rojas after 3rd-place finish
23d
Mets likely to make Rojas decision before others
28d
MLB Power Rankings: Where all 30 teams stand in the final week
27dESPN.com
Mets give Syndergaard start, shut deGrom down
29d
Your squad isn't going to the MLB playoffs? The No. 1 offseason question for each eliminated team
23dBradford Doolittle
Passan's early MLB free-agency tiers: Which stars are going to get paid this winter?
28dJeff Passan
MLB Power Rankings: Where all 30 teams stand as playoff picture comes into focus
34dESPN.com
Prospects who have taken the biggest step forward in 2021 for all 30 MLB teams
36dKiley McDaniel
Feb 26, 2014 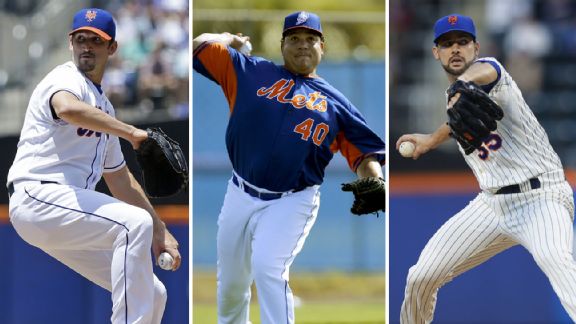 The Mets expect to start Jon Niese on Opening Day, followed by Bartolo Colon and then Dillon Gee.PORT ST. LUCIE, Fla. -- The Mets plan to start Jonathon Niese on Opening Day against the Washington Nationals on March 31 at Citi Field, then have Bartolo Colon start Game 2 of the season and Dillon Gee start Game 3, team insiders tell ESPNNewYork.com.

That would push Zack Wheeler and the fifth starter to the second series of the season, against the Cincinnati Reds, also in Queens.

The sources noted the decision is subject to change if there is an injury or weather complication, but that is the current plan.

Niese would make his second straight Opening Day start. He limited the San Diego Padres to two runs on four hits while striking out four and walking two in 6 2/3 innings last April 1, in an 11-2 Mets win.

Gee's success against the Nats last season ensures he will get a start in the opening series. Gee went 4-2 with a 2.72 ERA against the Nats in 2013. No other major-league pitcher had more than two wins against Washington.

The Nats are expected to start Stephen Strasburg on Opening Day opposite Niese. Jordan Zimmermann and Gio Gonzalez then should handle Game Nos. 2 and 3 in some order.